Our kindergarten concept requires that one of our two kindergarten-groups is only outdoors (buten), while the other of the two groups is mainly indoors (binnen). As a consequence the group remaining indoors has twice as much room for a whole month, because the other group stays outdoors in the woods until lunch every day.

Twice a month, there are meetings with both groups, where they meet in the house and prepare the rotational change. This concept has proven to be a good compromise solution for us in the past, combining the good sides of both concepts, that of a „normal“ kindergarten and that of a forest-kindergarten.

The 4-year-old Sven likes to make plans. Since his group has decided to rebuild his residential area as a plan, he has been showing a lot of intiative and has become a very active and crucial member of the group. All of the children in the group have learned much about layouts, plans and maps – in part in the woods.

Since 2011, we have the certificate “Integrative Focus Kindergarten for the Advancement of Gifted Pre-School Children“ and also carry the title“Consultory and Advisory Daycarecenter for the District of Lower Saxony”. Our children experience a lot of nature, thorough and comprehensive support and plenty of cognitive encouragement and facilitation.

The project I will present to you in the following was our longest project so far. First, we were busy enclosing the wide world for a period of a half-a-year, during the ongoing football world-championships in South Africa. My group started with South Africa. The others continued with Japan. India followed, and then we discovered more and more new countries we wanted to study, arriving finally – with a stop in Denmark (one of the kids had brought a flag from their holiday cottage) – back in Germany.

We had studied the languages, the food and the customs of these countries. We also used globes and maps to find out where exactly these places were and how far away from us they were.

For the characters of the languages, we used the book „Marcel and the Characters“, which I can highly recommend. (Also see: picture books, non-fiction and fiction.)

It was a coincidence that at that time almost half of our 3-6 year-olds were in their last pre-school year at the time and they had a lot of ideas for this particular topic. They wanted to draw the characters and also whittle and crave chopsticks. Our walls portrayed international artists.

In the mornings, I always bring my local newspaper with me from home, and then in kindergarten, it is scanned, evaluated, and cut out. This proved to be very fruitful, because the flags of the playing nations were printed each following days of the matches.

This was Sven’s (4;6) main focus of interest. During the entire time of the world championships, he would monitor that all the correct flags were there and everything was presented accordingly.

Sven has been with us since he was 3. Over a year long he refused to talk – if at all, he spoke only with the adults, and only when he wanted to – he would ignore questions and remained silent and passive in the circles.

It seemed that, as soon as he noticed or realized, that he had „accidentally“ said something, he would immediately grow quiet again. It didn’t seem like he felt unwell, he just wasn’t very active.

In this project he „came out“ and declared the matter of the flags as his „area of expertise“. At first, the older children found it peculiar and they were a bit astonished at his sudden unfamiliar input and initiative. After the older children had left to school, a new boy joined the group, a half-a-year younger and very much like Sven. And in the following he „came out some more“.

One day, one of the children remarked: „There’s a flag of Wietzen, too!“. Wietzen is the name of our community and we soon arranged to get one of its flags. 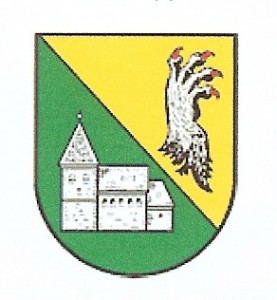 The local map showed the church marked only as a small cross.

One of the children said: „Funny, that you cannot see the church of the shield on the map!“

Which lead to the children wanting to make a map or plan, on which you could see the church. We needed a bigger map with real little houses on it. The smallest bricks we had were our wooden bricks.

So we glued together lots of paper-sheets to make a great big sheet of paper (luckily it was our turn to be indoors). On top of this big paper sheet, we built a church made of wooden bricks.

Now, we began to draw the streets. „Which direction do you go when you drive home?“ So, the neighbour villages had to be added and finally, the home of each child had been added to the plan – which had by then taken up the entire dimensions of the group-room!

Further questions came up and could be answered with the plan: „Who lives furthest away from anyone else?“ – „Which way do I have to go if I want to visit?“ …

Questions of this sort kept us busy throughout an entire circle-period. The children also practiced the „birds-eye“ perspective „from the top“ onto the chruch, and realized that you couldn’t recognize what the church looked like if you looked at it from the street.

Finally, we drew the outlines of the buildings on the plan (around each house), so that the houses could be cleared away.

When we were outdoors again, we found a gas concrete brick shaped almost like our church. We have plenty of these gas concrete bricks on stock for use in the woods. First, some of the kids began to rasp and form their own houses – of course, the sizes of these houses weren’t coordinated: We have a garage, too – next brick.

Another question evolved: How do you make the streets visible on the forest ground ? At first, we tried to carve them with sticks, but we weren’t satisfied with the result. Finally we thought of using saw-dust, which we found in the forest, where several trees had been cut down after a storm. 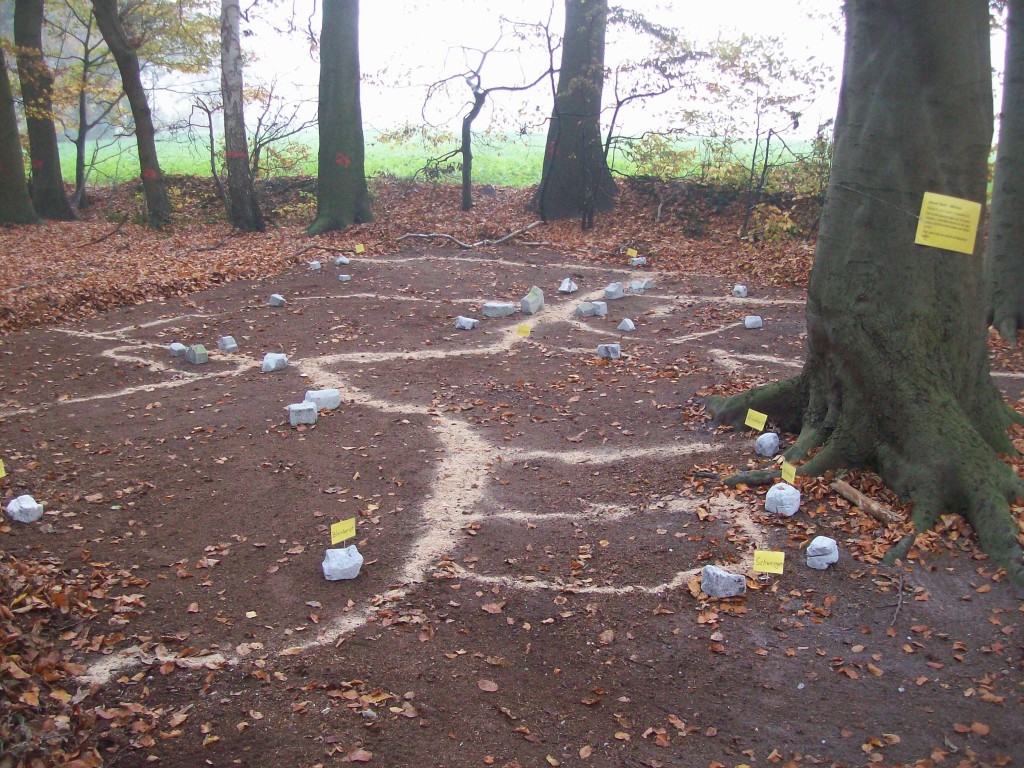 The map was constantly expanded. Whenever a new child joined the group it was asked to and supported in building its own house and finally helped to integrate it into the village plan. 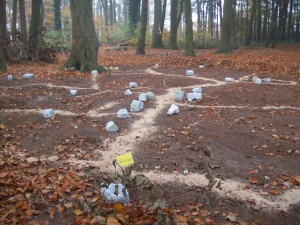 Sven had spent a lot of very intense time working with the plan or map, and it was him, who had thought of integrating the newcomers with their houses. He also noticed that the yellow village signs (located on the main street, at the beginning and end of each city in Germany) were missing.

One of the girls who could already write, wrote the place names on yellow paper and paid notice to their correct placement on the forest plan with sticks.

Sven also liked moving around in the map, walking along distances, figuring out which way he had to go to visit certain children. He also told the other kids where exactly their buildings belonged. 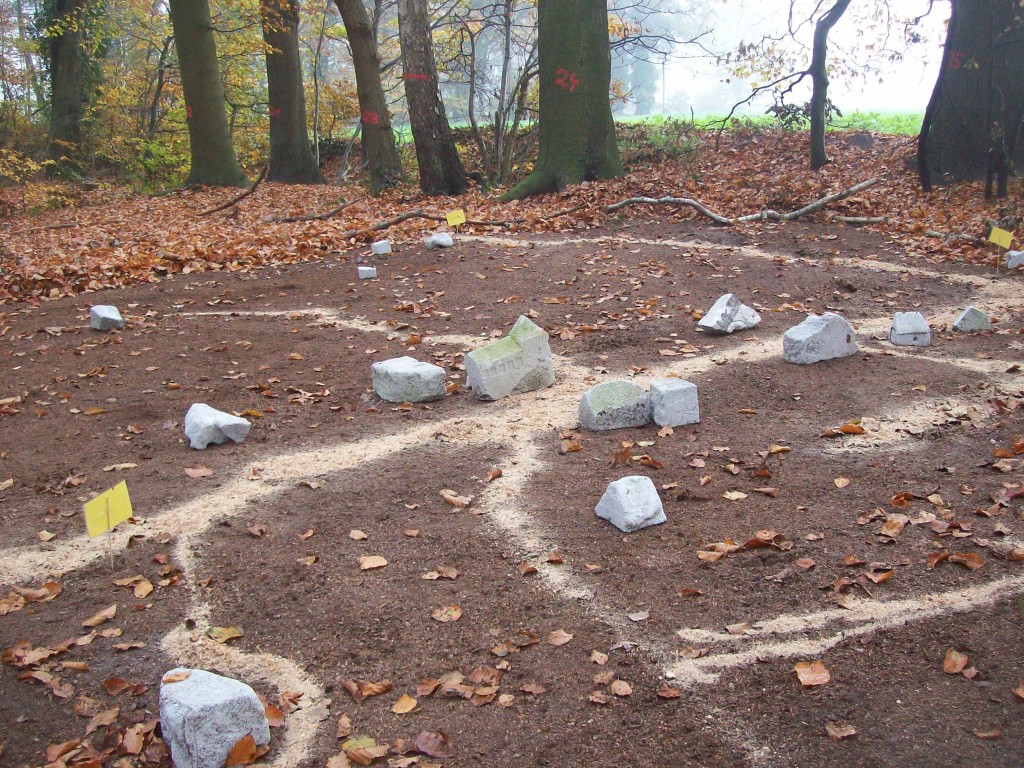 With the younger kids, Sven would help – himself being only 4 years old – and organize the right spot. He is still a very quiet child – but whenever he does say something, it makes perfect sense.

Once, in autumn, when the map had been completed and the leaves of the beech-trees began to fall on the ground, one of the children thought of raking the place clean, which lead to all the houses being piled up on the side. Soon, Sven and some other kids began rebuilding the village and now, it has been standing for 2 years. It is constantly being improved and corrected and expanded each time a new child enters the group.