In scientific literature one may find different positions and considerations on differing approaches to an understanding of what we mean by giftedness, while it is generally agreed upon that a comprehensive and final definition of giftedness is yet to be established.

This concept distinguishes between two types of giftedness:

One being the intellectual and cross-linked / integrated giftedness and the other being high abilities in particular domains.

Giftedness will here be seen quite literally as a gift, something a person is given, or more scientifically a disposition.

This gift is interdependent with the most differing influences accompanying the child, imprinting it and – in case of a positive course of events – help the child attain a self-concept which enables it to encounter the world in an affirmative and stable mindset.

This concept integrates quite intentionally the influence of the kindergarten since the pedagogic personnel working there has – aside from the family – an important attentive and supportive part in the development of the child.

Another difference of this model as compared to others is that (quantifiably) outstanding achievement is not considered to necessarily result from giftedness. Yet that for a person, who has received adequate support and who stands firmly in life, achievement will naturally follow as a result of an inner urge, that in such case achievement is an inherent characteristic of that person.

Several concepts such as for example the Münchner Hochbegabungsmodell [Munich Concept of Giftedness] by Heller, Perleth and Hany or the Mehrdimensionales Begabungskonzept [Multidimensional Concept of Giftedness] as proposed by Urban disclose the interaction between nature and nurture and its actual representations. Further conceptions are vividly depicted in Holling/Kanning (1999) and I recommend them for reference.

Personally I agree with Holling/Kanning in that the diagnosis of giftedness is strongly dependent on the underlying definition (see: Holling/Kanning).

For well-grounded diagnostics a corresponding idea of man is mandatory. I will therefore at this point outline my position on the issue of giftedness.

I am convinced that giftedness or any high ability comes to an individual as a gift – granted at birth. This gift is cathected positively and calls for being accepted and nurtured.

Prerequisites for the Evolvement of Giftedness 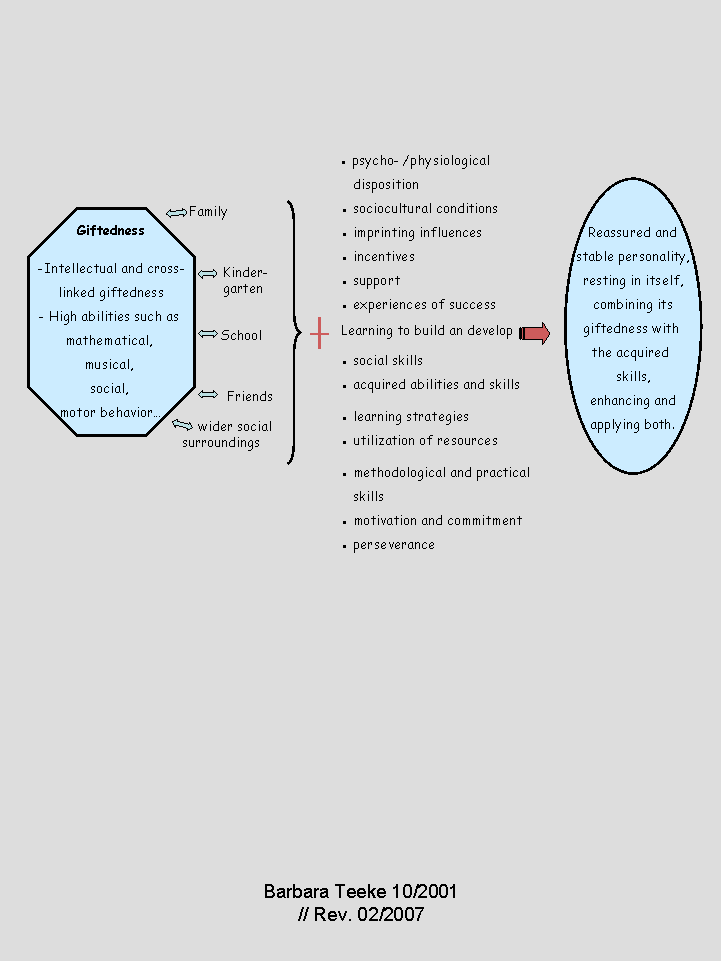 Two types of giftedness may be distinguished:

In this the higher intellectual faculties are taken as a starting point for the development of complex, sophisticated and excellent thinking.

This fundament cross-links with further faculties from different domains, which are not coequal and are not to be mistaken for points on a checklist:

High abilities in particular domains as for example

For illustration: For a person with outstanding accomplishment in the area of sports this particular giftedness may not extend to other domains let alone intellectually cross-linked thinking.

If intellectual giftedness were to be considered separately it would be no more than just that: a high ability in a particular domain.

However, my experience has been that gifted people dispose of a wider range of highly interconnected abilities than do people of high abilities in particular domains.

The gift of giftedness underlies the interaction of different influences:

Foremost is the psychological and physical disposition of the individual child.

Next to be considered is the immediate circle of persons affecting the child from the moment of its birth: its family. It is the other members of the family who provide for the child’s earliest impressions and experiences.

Next come kindergarten, school, friends and the wider social surroundings. Each one of these affect the development of the child and its self-concept. It is up to them which experiences the child will make, which challenges it will face and master, which and how much support it will receive.

Additional influences are the socio-cultural conditions under which the child grows up, imprinting influences, incentives, support and mediated experiences of success.

As the socio-cultural conditions under which a child grows up can hardly be altered it is also important for the entire group of the gifted that they meet people from different walks of life who recognize the children’s high abilities and skills and accompany them providing support and stimulation. A systematic support of the gifted, too, is necessary to help them develop a positive self-concept. This requires challenges which are geared not to their age but their individual needs, abilities and skills enabling them to grow further and beyond. This trying for and going beyond limitations should be accompanied by the experience of success. Success being the joy and satisfaction of having achieved something as well as the joy of this being acknowledged by others. As much as this may appear to be an everyday reality, for the gifted it isn’t necessarily so. They rarely find themselves in a position where they get to grow beyond themselves and learn something new – and all that at a point when it suits their individual pace as opposed to the pace set by their peers in age.

This may be true for a certain percentage of gifted children for whom customary enrollment at school would be reasonable in order for them to develop further skills, enhance them and make positive experiences which up to that point have not been made (for example the experience of having a friend).

Acquiring learning strategies, learning how to learn, is also very important for gifted children. They learn many things as if “picking things up while walking along” without much effort and therefore are oftentimes way ahead of their classmates. At the same time it is often hard to accept for gifted children to concern themselves with issues and topics which are of little interest to them.

In the end such tending to the individual needs of a gifted child will result in the child’s reassured and stable personality, which rests in itself, talents and skills being combined, applied and enhanced continuously.

Some annotations to complement this concept:

Ein Gedanke zu “Prerequisites for the Evolvement of Giftedness”