Through my observations on 5-year-old Peter, I realized that he would like to play chess, but did not openly say so. In the group of our school children (aged from 6 to 10) we had three older children with the same interest. So I brought Peter together with the older children and suggested to the children to found a chess club. Christian from the kindergarten (children from 3 to 6) also showed that he could be interested in it, he also came to it.

First meeting with the kindergarten children Peter (5) and Christian (6) and the school children Lukas (9), Manuela (8) and Philip (7).
I asked the children if they would like to start a chess club.

Christian (6): „A chess club? Where we always play chess?“

All the children agreed. They wanted to know whether they could start tomorrow. We arranged a planning meeting that could take place the day after next.

Lukas, Philip, Peter (5) and I sat down in peace that day, the other two children were not there. All three children have collected ideas what they would like to do in the chess club. Lukas wrote down the ideas. Except for the point „Opening of the Chess Club“ all ideas came from the children. They then also determined the order on their own, I only had to give little help. 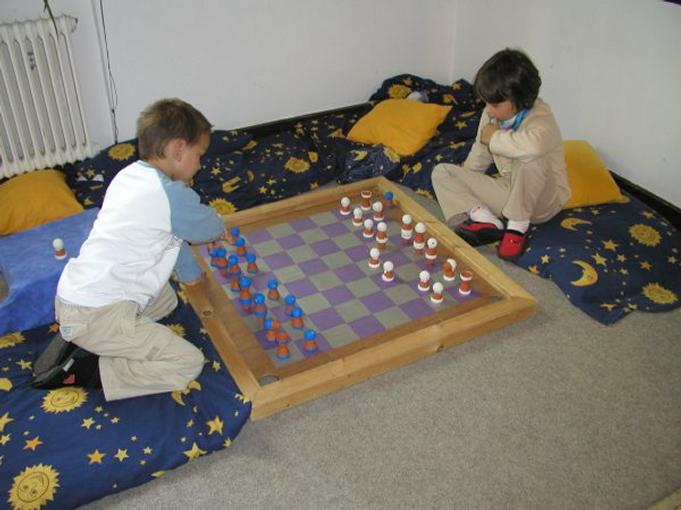 My suggestion was to open the chess club to other children. The children agreed – on the condition that this should be the last thing to happen.

Lukas wrote a poster for the parents with the following text thought up by the children, in which the children’s planning ideas are also reflected:

We have founded a chess club and have some plans. The following dates are important for this:

It will also become apparent that it took a while before the project really got going and filled the children with more and more enthusiasm. I carried out this project in the initial phase of my further training to become a specialist in the advancement of gifted kindergarten children (IHVO-Certificate-Course).

Today I know that I should have started differently: just start playing chess and don’t stop me and the children from doing too much preparatory work; because the children wanted to play chess and not do everything else, but at the beginning of this project I went the cumbersome way… I’ll write it down the way it was.

We originally wanted to go to the library to borrow books about chess rules. But this did not work, because 3 children (Peter, Christian, Philip) were absent this day. We have postponed the visit to another day.

The Snoezel room, which was no longer used so often by the children, was declared a chess club room; it was quite small, quiet and lockable.

The children photographed each other and me to make it clear that we are the founders and main actors in the chess club. The photos were attached to the clubroom wall.

The children also had the idea of putting a chess board and chess pieces on the wall. Two children painted 32 coasters with finger paints in black. Together with a black frame on the wall, the result was a chessboard picture.

A great, big chess board was brought along by my colleague from home. Now it was clear that we wanted to sit on the floor while playing. We got a carpet, seat cushions and two little tables for drinks.

During this time I thought I missed the topic and put too much pressure on the children.

This turned to the positive with the building of the chess pieces.

I have adopted the idea of a colleague to build the chess pieces from clay flower pots. I provided the materials (clay flower pots in different sizes, wooden balls, paints and hot glue gun), and Manuela and Lukas developed what the figures should look like. All children discussed in which colours the figures should be painted. They chose white and blue, the club colours of Schalke 04, because they are all fans.

All five children enjoyed creating the figures. They immediately agreed on which figure should look like. As the children were very motivated to play with their self-made pieces, they set up the sitting area in the chess club room on the same day and played their first game. I think the kids just wanted to play without all the preparations around it.

I made another observation which was interesting for me: My opinion was that the pawns were not yet finished; I found, for example, that the jumpers should still get a ponytail made of wool: For me it was not only about the beautiful appearance, but also about the better distinguishability of the figures.

But the children grumbled and all felt that they could distinguish the figures so well, which they proved. 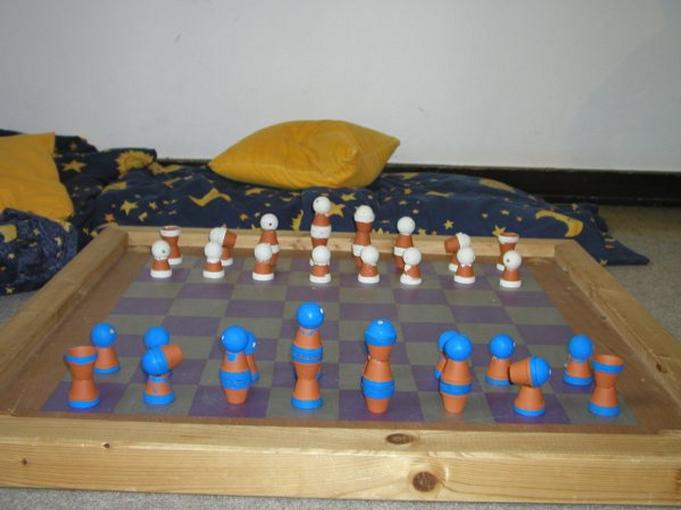 As a second action I had planned to go to the library with the children to get information about chess rules. However, this did not work for organizational reasons. So we threw our (little) knowledge together for the beginning.

When we later went to the library, the interest in the books was very high.
I think that in the beginning the children played for the fun of playing and that this has changed with time to the urge of „real“ playing.

By chance we got a PC from a father during this time. Manuela’s grandfather gave us chess games for the PC, so we could also use the PC to play chess. This was very well received by the children. They used the room for several, but also individually. 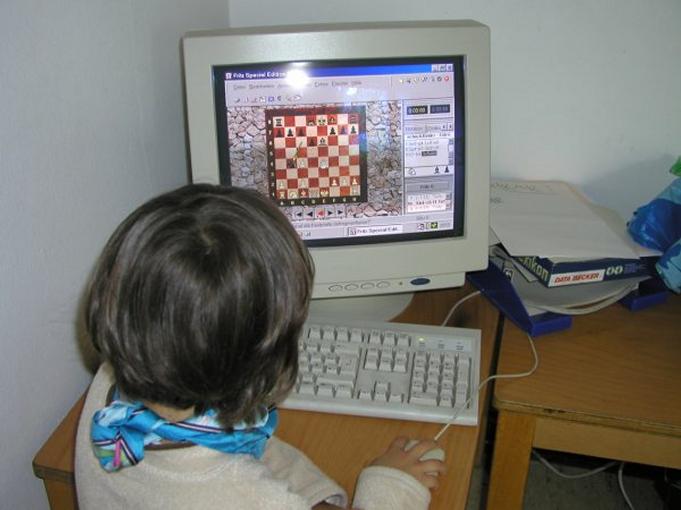 The children enjoyed having a room to themselves. On the following days they also took the key and went to play chess. They could interrupt their game at any time because they could close the room.

During the children’s game it could be observed that Peter (5) learned new things very quickly; he was also able to anticipate moves very soon.

While playing with the children, Peter (5) learned new things very quickly; he was also able to plan trains ahead very soon. This was a sign for us that he showed talent here and that he needed further suggestions.

He came running into the kindergarten in the morning, always wanted to play chess right away and finally brought his mother to chess too.

And so it should go on:

We announce the following dates:
On Thursday, 25.3., we will visit the library to borrow books about chess.
On Friday, 26.3., we will visit the chess club „Schwarz-Weiß“ (Black-White). We meet at 6 pm at Alleestr. 122. You can pick up your child at 7 pm.
On Friday, 2.4., the chess pro comes to whisper secrets of the chess world to us.
On Thursday, 8.4., the time has come! Now you can play chess against your child in our chess club room accompanied by coffee and cookies. Of course, interested grandpas and grandmas are also allowed to participate.“

That day we finally went to the library. The kids borrowed: Schachlehrbuch für Kinder (Chess textbook for children) by Markus Spindler and Tessloff’s Schachbuch (Tessloff’s chess book) by Daniel King.

By chance, there was a game of chess between two older men in the library. We watched until the end.

A mother gave us the telephone number of the chess club „Schwarz-Weiß“ (Black-White). In addition to adults, children and young people between the ages of 12 and 15 also play in this club. We were invited right away.

At 6 pm we met in front of the chess club. The children sat down at the tables and started playing. Some also used the chess clock. They were also invited by the children of the chess club to play. Our children were excited, curious and showed a long stamina and a great concentration. They certainly suffered some defeats that evening, but the next day they played and practiced again in the kindergarten.

Next week we talked about this adventure in detail, the children liked it very much. Visiting a chess club was very interesting for them. Here they had the opportunity to exercise their common interest with children of the same age and older children. They had quick contact with the strange children. The companions of the association were very open and turned to our children. Philip (7) and Christian (6) declared that they absolutely want to join the club. Philip was actually registered.

Through a colleague I organized an appointment with a chess master, whom the children immediately called the chess pro. He’s been playing since he was six. The chess master played a game with the children. Lukas and Manuela played together against Peter and the pro. He explained his thoughts on the individual moves to the children during the game and gave them tips. It was a quiet atmosphere. The game lasted one hour, the children were concentrated the whole time.

The chess pro said he would like to come back again to see the children’s progress. 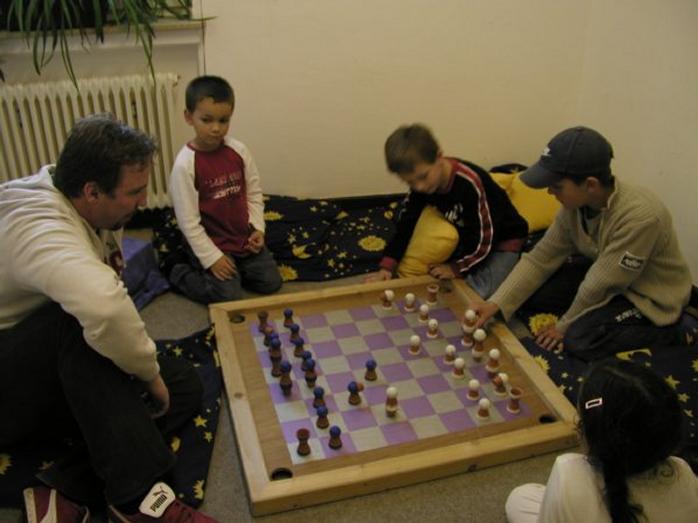 By visiting the chess pro the children learned new moves and rules, for example castling. They applied this again and again.

The kids had respect for the chess pro. The atmosphere was relaxed because the chess pro was very open and friendly towards the children. I had the feeling that he enjoyed being with the children. The children talked a lot about him later. At the parents‘ meeting the children also applied the newly learned methods and convinced their parents of the correctness.

The parents‘ meeting took place in a pleasant atmosphere with coffee, cocoa and cake and a lot of chess. All parents of the chess club children were present in the afternoon and on time. They used the chess room, the PC and three chess boards in the group room.

Some parents were excited, and some learned chess from their child. There were also games between adults in which the children stood by their parents with advice. There was a lot of enthusiasm. Some parents surfed the Internet to get new information.

13.4. Flyer and official opening of the chess club

The first step to the opening of the club was the creation of a flyer on a laptop. Lukas and Peter (5) created the flyer. I gave them help in handling the laptop. The children enjoyed experimenting on the PC.

We have distributed the flyer in the groups. We plan to send a flyer to each municipal kindergarten so that they can contact us and use our premises and knowledge. Unfortunately, no Kita has come forward, and nothing has come up to our inquiries either.

Then an official opening of the chess club took place, to which we had invited with the flyer. Children from the other groups, many parents and friends participated. There was also an intensive game between the Lord Mayor and the children.

The chess room isn’t as busy as it was at the beginning, but Peter and his four friends stick with it. Peter still plays almost every day, and our chess master continues to come by to guide and support the interested children.
Chess is now played in three out of four of our kindergarten groups.

With the project Chess Club I had the goal to bring Peter together with older children with the same interest. This has been achieved. He had the opportunity to pursue his interest, to acquire knowledge independently and to measure his skills against those of others.

An important goal has also been achieved for the entire kindergarten. Together with the children I have created a room where they have the possibility to play chess undisturbed. They have learned about other ways to express their interest outside the Kita.

Through the various project activities, the interest of some other children from my and other groups has now been awakened.

I really enjoyed the project and I think the children too. I will let the chess club continue running, as I think that there will still be children who are interested in it.