Since Änne has great imagination and disposes of a large vocabulary I had the idea to write a book together with her.
With this project I would like to find out:

As often Änne is sitting at the drawing table telling stories. I ask her whether she would like to write a book. I could help her and, if she wants to, she could add pictures. She is thrilled and immediately asks when we could get started.

A 5 years old girl accepts her kindergarten teacher’s proposal to write a book. She gets started right away and works independently while asking for help when needed. She confidently shows the book to the other children and receives their recognition.

Änne asks me if we are getting started today and says that she still needs a book to write into. So we put one together out of letter size pages using a coloured page for the cover. Then we decide to sew the pages together so that they do not fall apart and get lost. While I am sewing Änne is all excited and is clapping her hands.

Now we withdraw to the gym so we can work without being disturbed. I ask Änne: “What do you want to do first?”
She gives it a thought and then says:

“First I draw a picture of myself so that everybody knows who book belongs to.”

While drawing she makes comments:

“OK, I’m drawing the head and I’m laughing because I’m in a good mood. And blonde hair, I use yellow, but hair isn’t yellow. It’s called blonde, like yours, Diana.
OK, I’m 5 years old on this picture, I’ll write that next to it.”

I ask: “What else do you want on the first page?”
Änne looks around and since we are in the gym she sees the levelling board to measure how tall the children are and there are also our old scales. These items have been left around after our festival “Journey to the Land of Numbers”.
Änne:

“Can we use those? Then I know how tall I am and my weight and I’ll write that down, too.”

I hold up the levelling board and show her how for her head reaches on it. She looks at the numbers and says:

Since it is a number with 3 digits, 113, I ask her whether she recognises the 13. I give a short explanation the the number is composed of 100 and the number 13, which she already knows.
Änne:

“Alright, you’ve told me that. Come on, we’re weighing now.”

After weighing herself she writes the numbers down immediately and she is still very excited.
Änne:

„Alright, my first page is finished now. Diana, can do the second page now? I want to draw a picture at the bottom and the story is supposed to be at the top.”

Diana: “Do you want me to do the writing and you tell me what to write, or how do you want to do this?”
Änne:

“I’ll try myself first. Because it’s supposed to be my book.”

“You wonder why one is wearing trousers and the other one a skirt. That’s what you’re going to ask me, right?“

Diana: “Exactly, who is this supposed to be?” 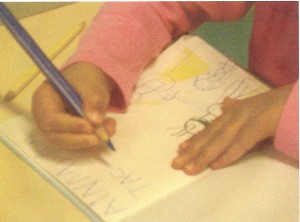 After finishing the drawing she begins telling me what she wants to write:

“One day there was a beautiful family in the country.”

I speak the sentence phonetically for her and she starts writing it in capitals. She has problems recognising the G-sound and I show her how to write it. Then she asks for help with the W. After I have written the letter on a piece of paper she says:

Oh, that’s just like the M, but upside down.”

I confirm this and tell her that Charlaine is from Morocco, and that the way her name is written may be different from the way we would write or pronounce it. I write the “sch” for her.

We complete the page in the same style. On the next page she again makes a drawing first and then writes: THEY WERE HAPPY.

“Oh, look how much I’ve written, I’ll read that out to my club of interesting people. I give them a cue and then they can listen.”

I ask her who is in that club and she tells me that she has just made it up and has not decided yet who gets to be in it. While we are cleaning up I take another look at the book and I tell her that I think it came out really nice and that I am quite surprised that she really does all the writing herself.

After breakfast Änne comes to me:

“Diana, are we working on the book again? I’ve got some great new ideas.”

A little later we go to the gym and she starts drawing eagerly.
Änne:

“I’m drawing a house and a cat. My sister once drew a cat, too. …
My cat is really nice, much better than Emmy’s.”

Diana: “What is it that you like better?”
Änne:

“My sister just draws a cat, it’s sitting, but my cat can even run. I’m going to draw a really nice house, too. It’s silver. I’m drawing the sky everywhere, because if you look like this …
(Änne points her finger out the window)
… you can see the sky everywhere out there.”

Having finished the drawing she tells me, without being told to do so, what she wants to write:

“And they had a beautiful house.”

About the word “they” [German: sie – pronounced zee] I say: “Oh, there it is again, the long “i”. Do you remember what I told you about it?”

If Änne does not recognise a letter she asks. For instance:

On the next page she draws a playground. While drawing she says:

“I love making books. I’ve never done it, but now I know what it feels like!”

Then she tells me what else she wants to write:

“Here is my playground.”

On the next page she only wants to draw. She draws big thundery clouds and a boat with a girl. She comments:

“You know, I’m drawing a boat. One time it rained so hard I could take the boat to kindergarten. I got it for a present. I’m drawing arms, too. I’m paddling.“

I ask Änne whether she has ever been paddling, because it is a difficult word, and I am surprised she knows it. She says:

“Of course I have, aren’t you listening? I just told you I paddled to the kindergarten.”

She finishes the drawing. Together we look at what has been written so far and we decide that she can be quite proud of herself.

Änne comes to me sometime during the day and says:

“Today I’m going to read out my book. It’s not finished, but everybody is so curious about it.“

I suggest that we all meet on the carpet later on and then she’ll be able to do her presentation.
Said and done. We are sitting on the carpet.
Änne is grinning, sitting in the centre, holding her book up and asking quite confidently and proudly:

“Should I read from the top? But you have to shut up or I’ll close the book and reading is over.”

Lukas: “Ok, I’m locking my mouth.” He moves his hand as if turning a key in front of his mouth.

“Yes, everybody do that, I’m watching. You can throw that key up to God.”

Änne begins reading out her book and turns the pages thoughtfully while observing the children closely. 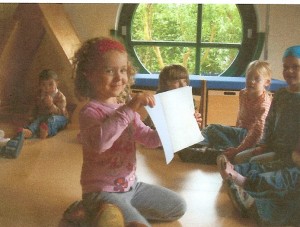 There was nothing on the last page, so she explained:

“The picture is to show you that, if it rains really hard, you can take a boat to kindergarten.”

The children are giggling.
Änne:

Jill: “Änne, can you show the book around one more time?”

She shows the book to everybody.

Eventually she lets everybody touch the book, too.

She tells the children:

When Charlaine is holding the book, Änne says:

“Charlaine, don’t turn the pages, only the first page!”

Alex, a boy who is still quite small and relatively new in our group, wants to turn the page.
Änne:

“Alright, Alex, you can turn the pages because you’re still small.”

Everybody is impressed and praises Änne for this.

Jona asks: “Änne, will you make me one just like it?”

“I’ll prepare it and I’ll put everything in place for you, but you have to write yourself.”

At the end, after all children have seen the book, I tell them, that I like the book a lot myself and that I am happy everybody else does, too. As a closing statement I make the remark that Änne might very well one day become a writer and that we will then be able to buy her books at the bookstore.

Änne, bursting with self-confidence, stands up and we all go outside to the playground.