Tim is 4;7 years old, he is sitting at the table and suddenly he says:

I ask: “Can you write that?”
Tim: “Yes.”
After every letter he repeats the word and speaks the next letter out loud and then writes that letter on a sheet of paper.
Tim: “L” how do you write “L”?
I show him.
Tim: “Ah, I see.”

The correct letters are randomly spread over the sheet. I ask him whether he can write that on a straight line.
“Yes!” – he says and writes a capital “A” on the line, that is when he notices that there is no more room. He tries again, all by himself. I’m not saying a word. He then reads it out.

A few days later three girls from another group join us, they want to play in our room. One of the girls’ names is Alina.
Tim says: “Alena and Alina are almost the same.”
I ask: “What’s the same?”
Tim: “The names: Alena and Alina.”
Me: “Why are they almost the same?”
Tim: “Because in one there is an “I” and in the other there is an ”E”!”
Me: “Good answer!”
Published in German: April 2012

Leona (4;3) has joined our kindergarten seven months ago. We’re sitting in the room with the fireplace (our facility used to be a residential house for one family), I am going over the mail and she is copying the names of some of our children from a list. She has asked me to draw a few straight lines – faintly – on the paper for her.

“Did you know that I can read and write, things like papa, mama, the names of my three siblings and, of course, Leona. I keep practising it by myself. Or I just copy from my siblings.”

Leona sits down with us at our table and eats a yoghurt. She is humming a tune. A cheerful grin spreads across her face and now she is singing out loud:

“Hänsel and Gretel, they got lost in the woods. The yoghurt, it was rotten, and the lid was pierced. That’s why the witch says: You’ve picked too much too fierce.”
She breaks into laughter and says:
“I’ve just refunctionized a verse new.”
Published in German: April 2012

Example from a family (anonymous)

Karl (3;10) was browsing a jako-o catalogue and discovered a doll and immediately fell in love with it. Until then he had not been showing too much interest in dolls but this one he really liked. He wanted it for Christmas and it was suggested that he draw it on list of wishes.
He went right to work – and the doll looked rather like the one in the catalogue, he definitely captured the type … 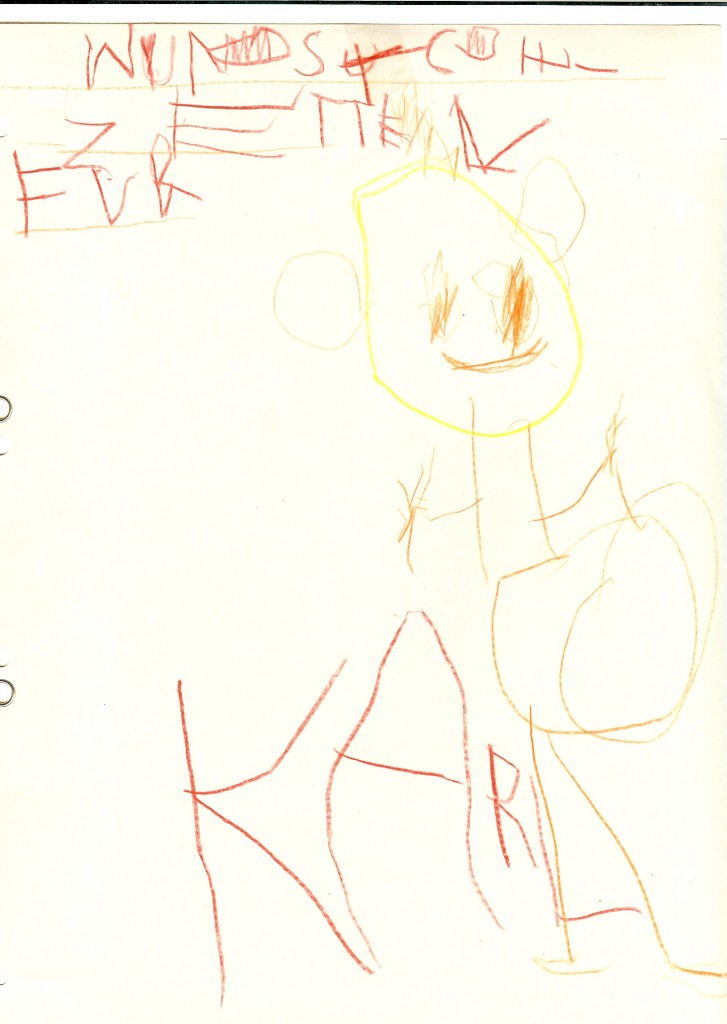 Then he wanted to write something, too. He had to be told the letters, some he knew himself, und his name he wrote all on his own. (The headline read: „WUNSCHZETTEL FÜR“ = “LIST OF WISHES FOR …”.)
He did get the doll.
Published in German: March 2012

Last week Mara (2;3) discovered the letters STOKKE on her buggy. She was thrilled and said:

When we were walking by a travel agent’s yesterday, she immediately saw several letters, she already knows, on the shopping window. Even on the glass, I was drinking from, she recognized different letters.

When driving in the car she said:

„Look Mom, there’s a U” , and pointed at the sign for the underground.

In the corner with the building bricks Johannes (4;5) is playing with Kapla-bricks [Specific kind of children’s building bricks of only one shape and manufactured at very high precision. Translator’s note ]. A kindergarten teacher appears on the scene and is asked to join in. Johannes takes a few bricks and, a little off to the side, begins to lay out letters. The kindergarten teacher picks up the situation and starts enquiring about the names of the letters. Johannes shows able to lay out and name the letters A, H, N, E, T, I, L.

Enno (4;0) was able to recognize letters very early on. Only 4 years old, he has by now learned to read quite well. He helps other children pick their name cards, keeps telling me what I’ve just written, reads out book titles to me …

Just recently he has begun to write (spelling as he hears the words). He even spells words out loud.

Felix is 4 years and 8 months old. His hobby is reading, which he has taught himself. After having spent quite some time of intense reading in an encyclopedia on animals, he is nowadays focusing on issues of the “Lurchi”-periodical and books on the topic of football.

He likes to do the reading out during our so-called “quiet playing time” (about 1 hour, starting after lunch).

The pure volume of reading and the speed at which he does it continually broadens his general knowledge, and by the same token his demand of input rises. When he is not challenged enough he reacts with unrest, tension and an urge for physical activity.

He reads fluently print- and handwriting while setting the stresses correctly and changing his tone when reading direct speech and even makes characters in the story sound different. He likes to read out to other children, and then even goes into impersonations of one colleague ”Would you like to hear a story?” and of our intern ”You must be quiet, though, while I’m reading …”

Judith (2;5) is interested in letters. She wants me to write some for her. She recognizes the O in words and is very pleased. She asks me to write down the names of her parents, her grandparents, my name and her own name. She wants to take them home and hang them on the wall over her bed.

Jerome (3;11) likes to draw pictures; he also likes to draw letters, of which he already knows a few. I noticed that he sometimes writes them mirror inverted. I directed his attention towards this but avoided terming the wrong direction of his writing as ’wrong’ but called it ‘mirror writing’ instead.

I showed him that the word written in mirror writing can be seen the right way when held against the light before the window and looked at from ‘behind’, through the sheet. He really liked that. He had written my name correctly before and when I asked him now to write it in mirror writing, he immediately did so without a mistake, which I found especially astonishing with regard to the N. We also noticed that with some letters it makes no difference which way you write them.

More about Jerome’s reading and writing learning process can be found here.