Joshua is a child with many interests. When he was four to five years old, he was very interested in technology books for a long time; he had lots of them at home that his mother read to him. He was interested in all the technical details and was good at remembering the corresponding names.

In the kindergarten group, he pulled the children along, he provided many ideas; he always wanted to explain his inventions very precisely and also demanded recognition for them.

He spent a long time designing machines. He did not claim to tinker the machines, it was enough for him to deal with them theoretically and fantastically.

I should write these designations in exactly the same way: 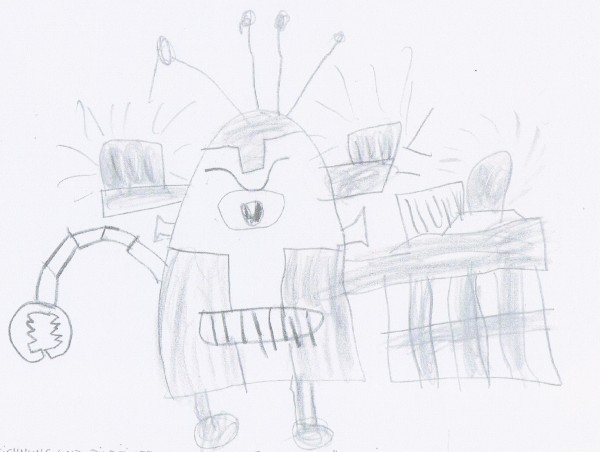 Joshua came up with the names for his inventions himself. The „Poligreif“ is a police robot (so there don’t have to be any more policemen). It has:
– an automatic burglar-gripping arm,
– a prison,
– an alarm system and
– blue light.

For the following drawing Joshua received a main prize from the children’s magazine „geolino“. 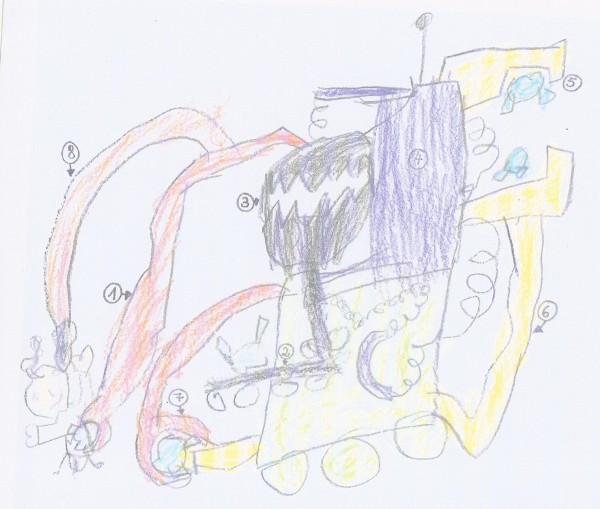 Again, he wanted me to label the individual parts of his machine according to his specifications:

Gripper arm (1) removes the dirty nappy from the baby and places it on a conveyor belt (2) where the nappy is fed into a shredder (3).
Inside the machine is a mini-sewer for nappy dirt (4).
When the components are cleaned, they are turned into a new clean paper nappy. This comes out of the machine at (5), falls into the feed channel (6), which leads up to the baby. There, the gripper arm (7) takes the fresh nappy and wraps it around the baby’s bottom.

To keep the baby still and satisfied, there is the soothing gripper arm (8) with a baby rattle on it. You can also replace the baby rattle with a dummy – for dummy babies.

The highlight is that the machine is sensor-radio-controlled, senses the smell of nappies (pee or poo) and automatically moves on its rollers to the baby…