In the last kindergarten year, we had positive experiences with the „Power Girls´Club“ and the „Club of the Gentle Boys“. Especially the girls have found a very good communication and learning atmosphere – and we will continue the gender separation for certain offers.

However, our future school children are together this year, i.e. girls and boys together, in the „Club of the Great Explorers“. The age range is from 5;1 to 6;2.

Now I want to try to integrate two much younger children, for whom school enrolment is not yet due next summer, into this club. Besides Elias (4;9), this is Jill. She has just turned 4 years old.

… in a nutshell …
The preschool group deals with physical experiments. Jill is only 4;0 years old, Elias is also still four – school enrolment for both of them is not yet imminent.
Should they still take part in the experiments? Will they have fun? Will they integrate into the group? Will they understand the experiments?

With Jill (4;0), we noticed her linguistic competence already when she entered kindergarten at 3;0. She was able to ask precise questions or formulate reasons.

She understands all conversations, explanations and stories without difficulty. She has many ideas of her own, finds solutions and ideas, which she also presents confidently. She needs a lot of attention, but can also occupy herself very well on her own. Cognitively and linguistically she is very advanced.

Elias is very open-minded and curious and loves to join in every nonsense. He loves picture books on all subjects. He loves to play in our movement room, where he likes best to determine what is played. If he has to solve a difficult task, that is no problem for him.

The „Club of the Great Explorers“ will deal with the four elements air – water – earth – fire (energy). (Here, of course, elements are not meant in the chemical sense.) I want to achieve that the children observe physical phenomena and draw insights from them. Furthermore, I want them to develop a feeling for the fact that these four elements are the basis of our life and must be treated with care.

The following questions will guide us:

Here again, as in the offerings in the „Power Girls Club“, the basis of various school subjects is touched upon:

Physics, medicine, psychology, food science, art, environmental protection and philosophy. I try to bring this interconnected perspective to the children in the offers and especially in our conversations during the club hours.

There are experiments, games, in-depth discussions and stories about the four foundations of life.

All participating children should also be encouraged in their self-esteem, in their communicative skills and in their thirst for knowledge. The conversation, in which questions always arise and I can also raise specific questions, helps the children to sharpen their thinking.

Special goals for Jill and Elias

Jill (4;0) and Elias (4;9) should experience in the „Club of the Great Researchers“, in cooperation with the older children,

The first club lesson – Jill and Elias join in

In addition to games, stories and conversations, the first club lessons also included two experiments with air (taken from the book: Neil Ardley, David Burnie: Exciting Experiments in Nature and Technology). In total, we conducted a series of 10 experiments in 10 weeks, two of which I present here.

The first experiment is about the question:
Does air have the force to seal a glass filled with water?

Jill immediately exclaims, „Yes, it can knock you over!“ Fabian (6;0) adds: „Yes, it’s the wind or storm!“ All six children tell us how they fought against the wind.

We go into the washroom and all do the experiment one after the other. I start and show the children how they have to turn the glass filled with water upside down and then let go of the cardboard.
Elias (4;9) wants to be the first and doesn’t listen carefully, he is often a bit impatient. The cardboard is not exactly on the glass and the water flows out immediately. I suggest to him to observe carefully first. Grumbling, he takes a step to the side and watches.

Lena (5;1) has to repeat the experiment five times because she gets tense and presses the cardboard into the glass too much so that the glass is not completely closed. I keep encouraging her to try again.

Fabian (6;0) is, as always, very circumspect and listens attentively to the explanations. He succeeds at the first attempt and then holds the jar for about 25 minutes, attentively following the attempts of the other children. He laughs and is pleased that the cardboard does not come loose.

Jill (4;0) looks enthusiastically at Fabian, but she has a different goal and sets herself her own tasks. She does the experiment six times, but with different conditions, for example, she fills the glass with different amounts of water, touches the glass differently when turning it upside down, shakes the glass a little.
At the same time, she observes Lena, who does not succeed in turning the glass around without the water running out, and she also observes Fabian, who is still standing there with his first (successful) attempt.

The experiment initially lasts 30 minutes; during this time the children talk animatedly and express different opinions as to why the cardboard lasts so long with Fabian and not with them.

Elias and Murat (5;8) say that they don’t want to hold the glass for so long; they each do only two experiments, but watch the other children with interest.

When the half hour is up, I suggest that they can also draw their experiment. Elias and Murat agree, the others continue experimenting for another 10 minutes and then quickly draw a picture until I end the club lesson.

Jill draws and writes, which she can already do amazingly well! Her picture: 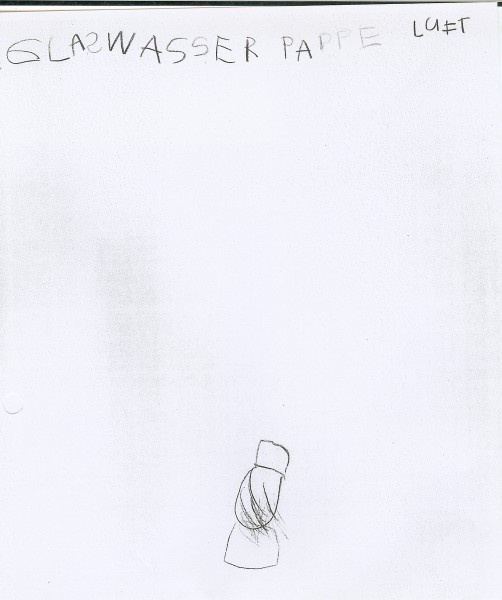 Only Fabian, who is two years older, has been able to draw the relationship between glass, running water and cardboard so clearly.

This time there are only five children present. Two of them were not there last time: Mehmet (6;0) and Viola (5;2).

Fabian, Jill and Elias tell them about our first experiment. Since all three want to explain the experiment, I suggest they could do it together. I have to ask Fabian again and again to let Jill and Elias have their say. It is difficult for him, but he keeps covering his mouth so as not to interrupt.
Together they explain the experiment, but each child adds their own special experience:

Fabian enthusiastically shares that his cardboard sealed the glass the longest and the water did not run out. He also adds that he has a lot of patience.

Elias explains that he showed the experiment to his parents at home. Mum and dad thought it was great – but once it didn’t work and the table got wet.

Jill says that she has done the experiment many times and that it always worked because the air has pressed against the cardboard with so much force.

The other two children now also try this first experiment – and then we turn to a new experiment.

Here the question is:
Does the air have the force to crush a plastic bottle? 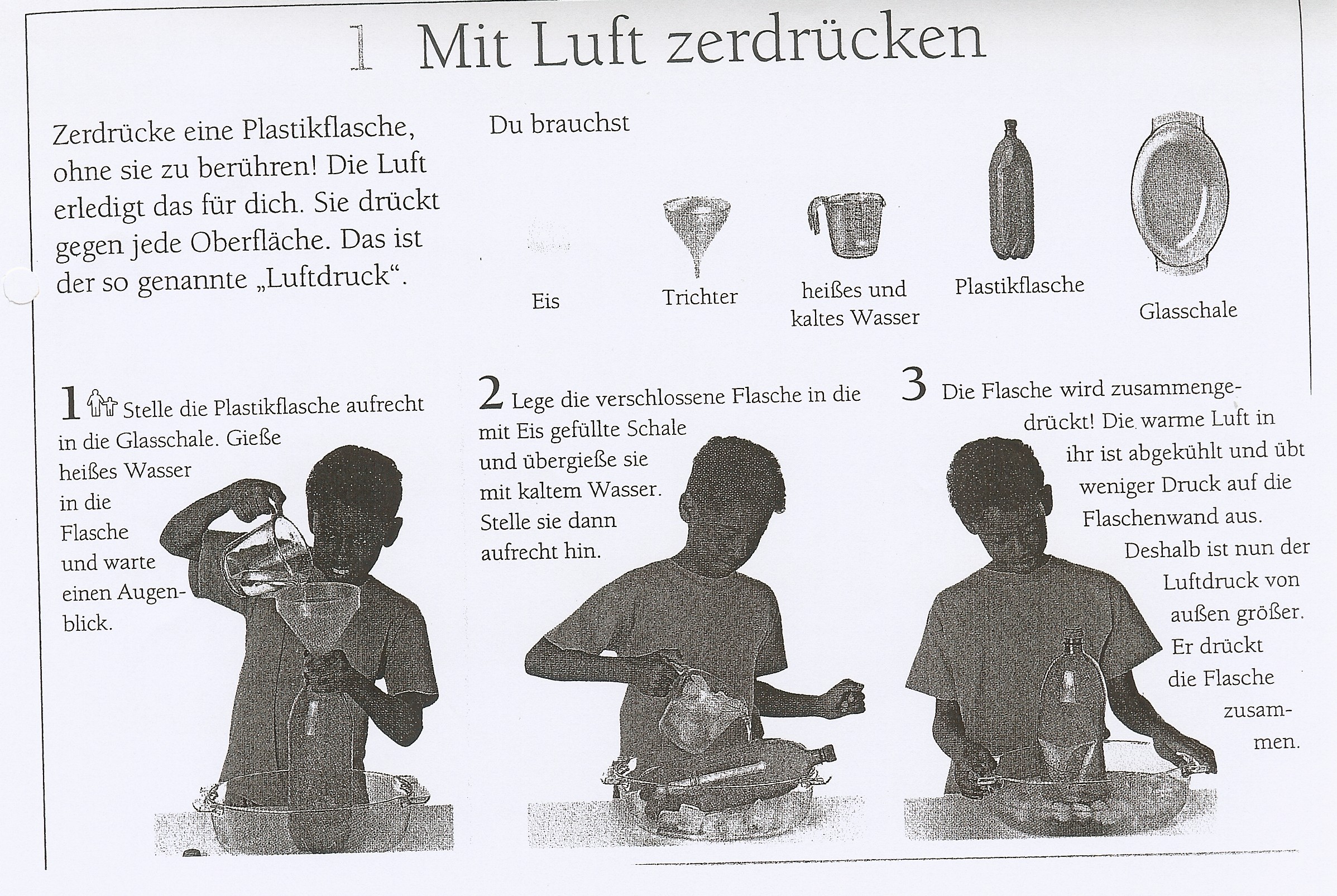 I fill the first plastic bottle with water that is too hot, so that it deforms. So we have to cool the water down a bit, and Fabian also knows immediately how: „We just have to pour some cold water into the hot water.“

So we start our second attempt, Fabian fills a new bottle about a third full with the warm water. (Unfortunately, the book lacks the hint that the bottle must not be filled to the top!) Then he closes the bottle. Now the air in the bottle can warm up. (That’s the only purpose of the warm water!).

The other researchers fill the ice cubes into the bowl.
Now the children take turns pouring a little cold water onto the bottle and wait for us to hear a soft cracking sound and for the bottle to make small dents.

Everyone is excited to see when something will finally happen to the bottle. One child calls out, „I’ve already seen something!“ Unfortunately, nothing can actually be observed on the bottle yet. Fabian remarks: „But the ice cubes have already become smaller.“ That’s right.

Elias then first discovers a small dent in the bottle and says: „But I’ve seen a dent now, there, there!“
Jill and Fabian exclaim: „The air can crush the bottle!“

The researchers laugh and look at the bottle again and again, which has got several dents in the meantime.

We talk about how warm air needs more space than cold air and that’s why our experiment works: When the air in the cooled bottle cools down again, it contracts. It no longer needs all the space and can press less against the bottle wall than the air outside the bottle.

The children also realise in the conversation that the water is only needed to heat and cool the air.

Assessment after all 10 experiments

Elias and Jill had no difficulty at all in following the experiments. They always understood the connections. I could see that in their questions and especially in their answers.

They are by far the youngest children in the club, but they were integrated into the group from the beginning. In no lesson did a child express that Jill and Elias did not yet fit into this club of pre-school children. Since they participated very actively in our discussions and experiments, it was always clear that they were right for the „Club of the Great Explorers“.

Jill and Elias are among the children who have participated most often and have enjoyed sharing their knowledge. Jill is the liveliest girl in the club and Elias one of the smartest boys.

Fabian is the child in the club with the most extensive knowledge and a keen open-mindedness and perseverance to experience and learn new things. He is obviously a good learning partner for Jill and Elias and perhaps also a good role model for them.

The decision to include Jill and Elias – according to their stage of development as observed by us – in the Club of Great Explorers was a positive step to encourage and support them in their talents.

For Jill and Elias, the goals formulated above
have been achieved.

See also: Playfellows and Friends of Gifted Children and Acceleration and Enrichment