These sheets were created during my practical work in the kindergarten, drawn freehand. (Exception: Labyrinth in a cake.) My collection included many beautiful tasks, which I do not publish here for copyright reasons.

Sometimes children just feel like solving such tasks. This means that the sheets should be accessible, but never should a child be pushed to work with them.

Here are four examples. You can find more below in the Sheet Collection. 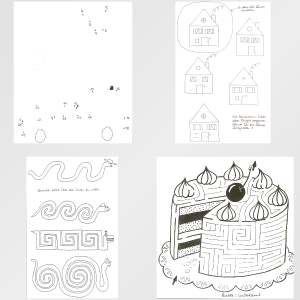 Please copy from the Sheet Collection whatever you or your children like.

1) Example of editing by a girl, 5;3 years old. Most children still have cognitive problems with mirroring at the age of six and would not be able to complete the drawings in this way – correctly.

2) A boy (4;1) first patiently painted beds for the dwarves. Eventually the desire left him and he also lacked the space, so he found two creative solutions:

3) A boy found the leaf pictured below when he was 3;6 years old. In response to his questions: „What is this? What can you do there?“ I explained to him that you can take a pencil and draw a path through the cake with it. That there is only one path – and that if you get lost, you have to turn around and go back until you can take another path. Thereupon he set to work.
The only help he needed was at the top right: „The path goes into the cream dab.“ 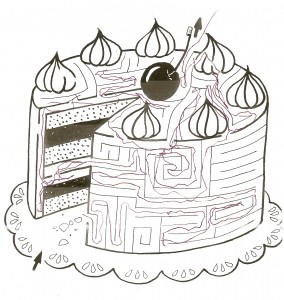 Half a year later, the boy (now 4;0) took the sheet again for editing. Now he could handle it all by himself and much faster than the first time: 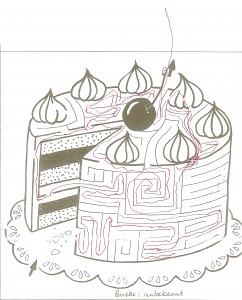 It is important, especially for gifted children, that they do not receive such sheets too late:
At the age of five or six, the boy from the previous example would probably have found the cake maze very ludicrous.

The presentation of the examples should also help to make sensible use of the workbooks for preschool children that are available in large numbers on the market, i.e. to make a sensible selection and offer them in a way that suits the child’s cognitive development.

This can also be seen in the example
5). The same boy found the labyrinth below „baby easy“ at 4;1; he did it, but – unlike the cake labyrinth – he did not show a high level of concentration, enthusiasm or satisfaction at having done it. 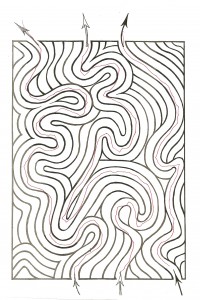 6) „Preschool notebooks“ are generally not given to children until they are five or six years old, if at all. Tasks in which numbered dots have to be connected to form a picture are popular. 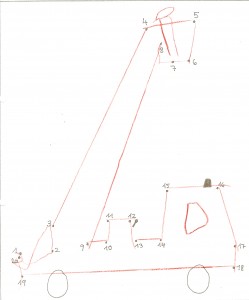 This sheet was worked on by a much younger child: a boy aged 4;2. As he found it difficult to draw straight lines, he used a ruler for the first time in his life.

He dealt with numbers up to 20 at this time and very soon moved on to large numbers and arithmetic operations.

So now with 4;2 with him it was the right time for this sheet.

I have found a wide variety of opinions on such „worksheets“ among kindergarten teachers.

Some reject them on principle because they seem too one-sided, since they only address cognitive interests. I was then surprised when the same colleagues, for example, had nothing against stilts – even though they (one-sidedly) only address the children’s motor interests. „But practising with catwalks is fun,“ one teacher replied when I pointed out this contradiction. There it was again, the prejudice that cognitive games can’t be fun for children.

I have met other colleagues who reject such sheets because they do not want to focus the children’s cognitive development on them, let alone reduce it.

But this is neither sensible nor necessary. They are gimmicks that excite and challenge some children – no more and no less:

Toys for the little „grey cells“, which the children
can choose very individually and which can be provided additionally without much effort or cost.