Yet, not only in the field of mathematics, but in all areas of our natural, technical and social environment there are rules and patterns to be discovered. And it is quite possible, and for gifted children even appealing, to develop systems of their own, which will then work by certain rules – again, in all conceivable areas.

In everyday life at the kindergarten it is easy to notice, when children quickly recognize and memorise the daily or weekly routines and try to follow them closely.

At the same time a rapid recognition of patterns and rules may be expressed, when children of a certain age and development suddenly come up with explicit rules by which they stack building bricks, or when they immediately understand and perform the rules of a game.

Jonas is 5;9 years old. He takes a work sheet and, without any further explanation, solves the task quickly and without the slightest mistake: 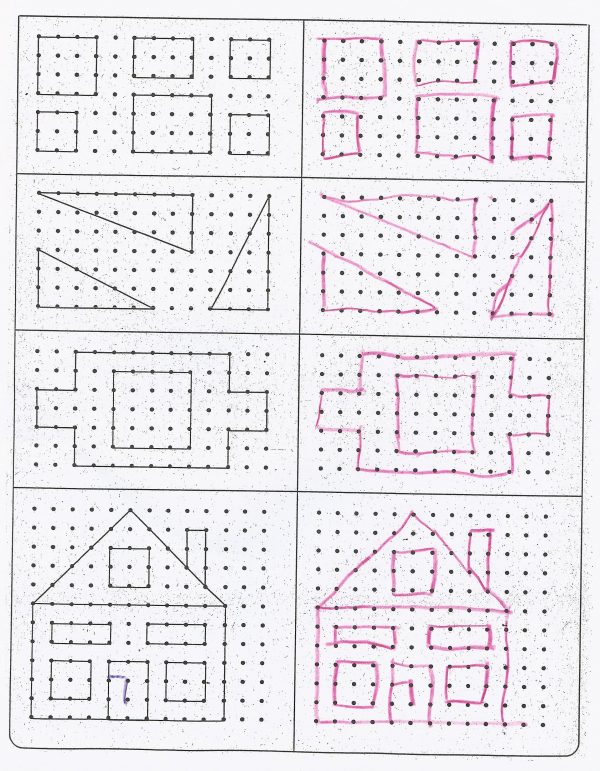 In doing so Jonas does not only demonstrate fine motor skills with regard to drawing, which are quite good for a 5-year-old, but he immediately understands the underlying system of the task. His geometric grasp and his swiftness are astonishing.
He adds a door handle in both pictures.

One morning I noticed a pin board with the holes arranged just like in a Chinese Checkers board game. So I sat down at a table and set up for a game. Jerome (4;11) noticed this and asked me what I was doing.
I explained that this was a game called “Halma” (Chinese Checkers’ name in German) and asked him if he would like to try it. He said yes and I explained the rules to him.

He understood them right away – even the principle of “building paths”, which enables a player to cover greater distances by leaping over other gaming pieces – so we could get right into it.

In the first round I still had to point out possible moves to him and I won this one. The next round he won – and it wasn’t that I let him win, he really did beat me. All the while the hullabaloo all around us could not distract him a bit, and he even asked to play a third round.

I wanted to cross check my impression and asked a 5 years old girl from the same group, which I also considered to be one of the brighter children, if she would like to play a round of the game with me. It seemed that she didn’t comprehend the rules of the games nearly as well as did Jerome. She therefore gave up in the middle of that round, saying that she didn’t quite understand the game. This showed me once more the difference in the speed of comrehension between Jerome and other children in the group.
Published in German: June 2012

There is a wonderful children’s book called „The Smart Crow“ whose story is based on an old tale.See: „Die kluge Krähe“  Picture Books, Non-Fiction Books and Stories

Oscar (3;4) did not know this story yet, and that gave me the idea for a little experiment, especially since we currently had quite a drought and everybody was putting out bowls of water for the birds.

So I told him that a long time ago the birds were very thirsty. They could not find any water and were desperate. Then a crow found a tall and narrow pot with some water left in it. The birds sat on the rim of the pot but could not reach the water, it was too far down inside and their beaks were too short.

Eventually the crow had an idea. It said: “Go get as many little stones as you can.” That is what they did with their last remaining bit of strength and the crow threw them into the pot.

I re-enacted the scene with Oscar. We took a small glass jar with a narrow neck and filled it up to one third with water. Then we rolled up small balls of putty, they were supposed to be the stones, and threw them into the water one after another. Oscar observed this closely and assessed that pretty soon the birds would be able to reach the water.
I asked: “So, is there more water in the jar than before?”

Oscar burst out: “Nooooo! That’s because of the stones. The water can’t be where the stones are.”
Published in German: May 2011

Over a period of two weeks, on a daily basis, I observed a girl (2;0) playing Duplos (large Legos), which were new to her. After three days she began building strictly symmetrical structures. The overall shape of each building was absolutely symmetrical, what’s more, the distribution of bricks by size and colour consistently followed the regime of symmetry.

After another couple of days of successfully building symmetry her interest declined. She now began building fences (irregular ones) for her little animal figures, strictly following a new rule: the correlation “one pen – one animal”.

Even at her very young age of only 2 years she was already proficient in recognizing patterns and rules, as with every other Duplo brick she had to decide, whether it obeyed the rule of symmetry.