At the moment I am working alone in the group, my group colleague is absent for a long time. Therefore, the implementation of my last practical task (in IHVO Course) was difficult. The project fell by the wayside in the given time frame, but I did my best together with the children, went into planning and partly into implementation. And we will continue to keep at it.

Among other things, toy-reduced, nature-based and sustainable work are firmly anchored in our kindergarten concept. We have a very large outdoor area with many different areas such as old wood hills, stone play area, tactile path, raised beds, biotope, various plantings, bee hotel, fruit trees, snack garden, climbing trees, mud corners, hiding places.
Our children play with pots, pans, things from everyday life and deal creatively and sustainably with themselves and their environment. We have also participated in climate protection projects and worked intensively with the children on this and incorporated it into everyday life. Our aim is to make the children aware of life in their environment, to appreciate the (still) existing resources, to be sensitive and mindful.

In the spring of 2021 of the Corona pandemic, the author started an environmental project. The planning was already well advanced, the observation child Jens (5;2) and another boy were very engaged and looking forward to the further implementation. Then lockdown and emergency operation made the working conditions more difficult and the colleague had to change her work with the observation child. (You can read about this here:
Kita-Work in Corona Times).
But even the planning is stimulating and valuable.

In the course of an earlier project, four kings (water, electricity, nature and health) moved into our kindergarten and together with the children they took care of our environment.

The Covit 19 pandemic has already shaken things up and required a lot of rethinking and restructuring. There are positive and negative sides, as with everything in life.
However, I have noticed that the above-mentioned pedagogical goals and conceptual priorities have fallen by the wayside. I am aware of the effects of this on a daily basis. There are simply carelessnesses that we are now guilty of, starting with the separation of waste and ending with light-filled but empty rooms and running water cranes. As a result, we recently noticed in the team how often it happens, for example, that the light is on in rooms where no one is present.

My observation child Jens (5;2 years) and Fabian (6;2 years), one of my preschool children, were very attentive and interested in this. They even had a conversation with our kindergarten director about it and she told them about the Electricity King. Jens didn’t know it yet because it was before his time in our kindergarten.

He was immediately enthusiastic and Fabian remembered which kings there were and all the things they did with the children. I mentioned the Water King, who absolutely has to come again to explain to the children that you shouldn’t always leave the water running.

The two boys were full of energy. They wanted both kings in the group immediately. The three of us discussed that the Electricity King and the Water King could move in with us in the group to help us not waste so much water and electricity.

Unfortunately, the two noticed that the puppet Electric King was already pretty battered and the Water King had dived/disappeared. They thought about what materials they would need to restore the Electricity King and recreate the Water King.

With the kindergarten director they went to get materials and came back shortly afterwards. Then they started crafting, accompanied by me.

My objective:
The importance of their project is taken seriously and I support them in developing their own important task, which they significantly design themselves according to their ideas. 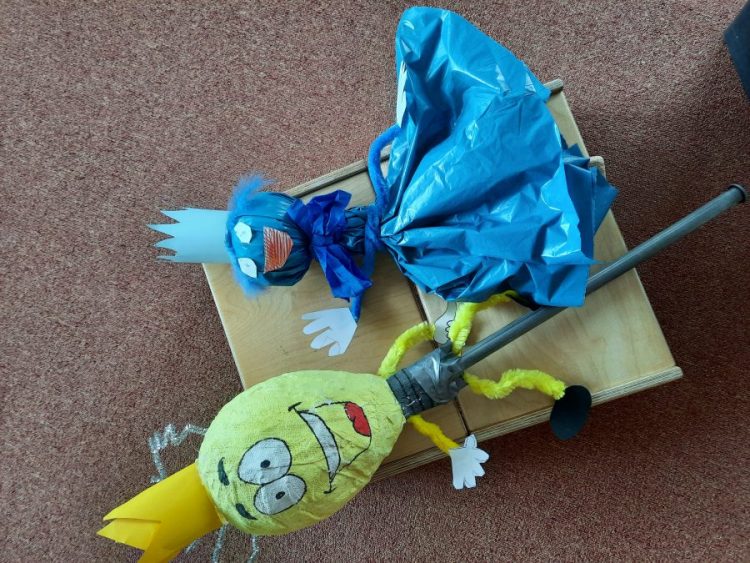 While we were making the two kings, according to the children’s ideas, we talked about what they would like to do with the kings. Inspired by the task of the kindergarten management to take care of electricity and water in the house with the kings, their ideas bubbled up:

Goal:
The children’s self-confidence is strengthened when they know how important their actions are, what successes they can achieve with their task/project for the kindergarten, that they can achieve something big with their efforts.
They take on a responsibility in which they can grow with their abilities and where they can fully express themselves because they can plan their own actions and make decisions and it is highly valued.

The two boys, who are also good friends, now thought about how to organise themselves and discussed different strategies. Each brought in his ideas and then they  discussed the ideas. I only accompanied and supported when necessary.

Jens really wanted to lead a team with Fabian because they are friends. He admires Fabian a lot. Fabian is a popular playing partner in the group and has many friends. The Corona Lockdown times and the fact that they are both in the kindergarten all day have brought them both even closer together.

Fabian, however, was in favour of splitting into two teams so that he could participate in both teams and make a difference.
Jens visibly found the decision difficult, he was torn and shared that he didn’t know how to decide.

I stepped in with a few questions:

Jens: Fabian, if you remain my friend and we are not opponents, then everyone can be a team leader.

Goal:
I didn’t want to influence the two of them about the further course. I wanted to support them to think through their own course of action, to cooperate and to act and decide on their own responsibility and to find a solution that is acceptable to both of them.

Jens and Fabian then discussed the matter further and made the following decisions:

Both also decided to help each other.

Goal:
Both boys have been able to act on their own responsibility to take on an important task. They can contribute with their skills, ideas and possible approaches and with the demanding main responsibility for their team and include the ideas from the team.

They have the opportunity to clearly define their role as a kind of team leader to which the others can orientate themselves, as well as to benefit from their skills.

My idea is to show the gifted child a way to get out of the attitude of „I am different, I am wrong“, because here he or she takes on a different role.

In the morning circle, we select interested children for the two teams who would like to participate in the two small projects.

I asked the boys what is important to them about the topic of „electricity and water“.

Based on their reflections and thoughts on this, I thought about questions together with the boys that we think are important to work on in the teams:

Electricity:
1. where does electricity come from?

2. where is electricity everywhere?

3. how does electricity work?

4. where can I save electricity / what can I do differently?

Possible actions:
1. research with the help of books and other media, make collages.

3. understand electricity circuits and make them themselves (electricity boxes).

Water:
1. how important is water?

2. where do we use water everywhere?

4. where does the water from our tap come from?

Possible conclusion:
An exhibition in the kindergarten about our project in order to transport our sustainable topic as widely as possible, to sensitise our environment and to create a new awareness.

Goal:
An offer for the children to contribute their skills and talents in a variety of ways, to learn from and benefit from each other, to contribute knowledge and to gain new knowledge. They learn to cooperate with each other and to value everyone with their own personal abilities.

The transparency of an exhibition gives the project, the work of the children, an important status. It becomes clear to the children what they have achieved in their community through the contribution of their individual skills.

This is a good opportunity for the gifted child as well as for all the others to grow in their personal development with such experiences.

I put together the ideas for possible actions on the basis of the questions I had considered with the two team leaders. Whether and how we implement what, or how something develops differently / further, will then become apparent in the further course with the two teams.

I have not yet been able to go into the further implementation due to my above-mentioned situation. I am looking forward and am very curious to see how our „King Project“ continues and also what experiences and processes develop with the children, especially with my observation child Jens.

Addendum:
The further pursuit of the project then unfortunately fell victim to the Corona restrictions for the rest of my IHVO Course time, as Jens was one of the few children who came to the kindergarten at all.

And so Jens‘ further promotion also had to be different.
You can read about what happened next here:
Kiindergarten Work during Corona Times (in German)