My „observation child“ Alena is now 5;2 years old. She has decided not to go to school yet, so I continue to look for suitable challenges for her.

More about Alena (in chronological order):

The Dead Mother from Pompeii and Crayons for South Africa

Alena (5) Studies Letters – When Should She Go at School?

And after the „Shadow Theatre“ comes

Alena (5;10) and a Small Group Are Becoming Experts of the Learning Workshop

After Alena decided this spring not to go to school yet in the summer, I invite her to join the „Blue Club“ of the five-year-olds who will not become a pre-school group until the next kindergarten year.

In our kindergarten, the children go to mixed-age groups. In addition, there are age-homogeneous groups – such as the „Blue Club“ or the pre-school group, which meet regularly – once a week – for their special projects.

Alena participated for a while in this year’s pre-school group. Of course, she could stay in this group – the decision is hers. But after her first visit to the „Blue Club“, she demonstratively fetches her pencil case from the pre-school room and announces that she will now take part in the „Blue Club“ shadow theatre.

At Christmas, the club had performed a short play and poems in front of all the parents and children. One of the main characters was speechless because of the crowd. That’s how we came up with the idea of shadow theatre: trying out self-portrayal and staying in the „shadows“ ourselves.

To start with, we build a first provisional shadow stage in the darkened room with a rope, a bed sheet and a lamp.

A boy recognises it because his parents have performed a shadow play before. The children experiment with light and shadow: The closer I get, the smaller I become. We play: Who is the shadow? The children use their hands as figures, have little dialogues. My colleague and I are very surprised at how openly the children play.

What do we want to perform?
At the next meeting we will bring our theme of the year, „The Forest“, into play. What can we think of for the forest as a shadow play? Which forest figures should be in the play? It should mainly be the animals of the forest. Alena suggests bringing along her self-made witch – so a witch’s forest, good! She also takes an active part in developing the story.

We plan our next steps:

In free play we paint the forest animals, cut them out, peel the reed stalks from my garden and attach the figures with crepe, UHU glue and finally hot glue. 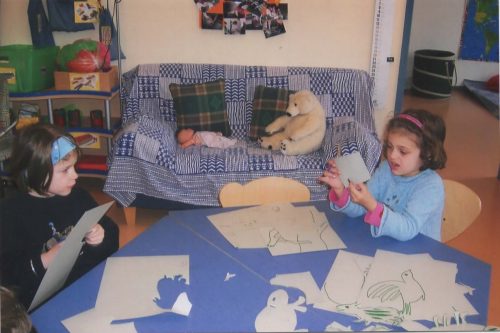 Alena takes our forest book to help – so all kinds of animals, trees and bushes are created.

The stage construction is moved to the gym. We work with dowels, a rope is stretched and a bed sheet is fastened with clothes pegs.

But you can see our bodies backstage at the play – what are we going to do? We get some dark fabric, another line… Step by step, the children develop their own ideas for solving the problem.

We can’t hold the figures of the forest – we don’t have so many hands. The forest does not move; so we can stick this scenery on.

The course and text of the theatre play emerge

During a small group activity (in which Finn, Mariana and Beatrice take part as well as Alena), the children think about the course of the story and the text. First, the animals are divided into day and night animals and then brought to the performance according to their size.
Mainly Beatrice and Alena create the text, which I write down.

Drawing the course of the story on cards as a reminder proves too difficult. So we put the individual scenes on a large blue gymnastics mat and photograph them, and the children join in – a simple but instructive action.

Shortly afterwards, I bring back the printed photos. I have also printed out the text and  cut it into strips in a one-to-one activity with Alena, each to match the scenes.

I ask Alena: „Would you like to speak the text with Beatrice sitting in front of the stage?“ – „Mega good!“ she replies. I read her the lines of text and Alena matches them to the corresponding photos and sticks the strips under the photos.

Rehearsing until the performance

Stage, set and characters are made, the story is ready – now the rehearsals can begin.

Beatrice greets the audience – Alena doesn’t want to. Both sit in front of the stage, have their numbered cards and recognise the text from the pictures. They always speak in turn.

Each child behind the stage plays a day animal and a night animal. The children sit with the day animal ready to start on their hand, while their night animal lies on the floor.

And this is what it looks like backstage before the play begins.

My colleague stands in front of the stage and helps the speakers. She gives us instructions and I act backstage. Alena and Beatrice tell us if our characters are easy to see and if you can’t see our heads either. 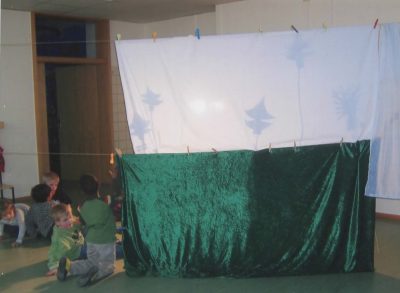 And this is how the audience sees the stage.

We draw a line on the sheet because we can’t see where the white sheet ends at the back. We are not quiet enough. Amar, who wants to speak the final sentence, speaks too indistinctly – „You know, he is Indian, don´t you?“ says Alena.

The children backstage do not spare with their criticism with the audience: „You have to watch what we do! A mouse isn’t that fast! Wait with the text until the hedgehog has gone!“

Sometimes the two of them speak the wrong text; that’s why the photo cards were numbered – big protest immediately! My colleague almost despairs when the two girls „shuffle“ the cards.
We record our play for self-checking – now our character players see what they are playing.

The big day arrives, the theatre play is performed twice with great success. The following week we show the play again to all the children in the kindergarten, who are then also allowed to play.
The joint dismantling of the stage is the provisional conclusion of this project.

What did we get out of the project?

All the children were very committed and seriously involved in the development of the shadow play. Alena has definitely gained in self-confidence and courage to present herself – even to the point of coming out of the „shadow“ and acting in the light in front of the stage.

Beatrice is an extremely open-minded, intelligent girl whom Alena takes her cue from. The joint school preparation will certainly not be boring for Alena.

Meanwhile, in Budapest, I saw a shadow play performed by students. The construction of their stage is inexpensive and also quick to erect and dismantle. It consists of two parasol stands, sanitary pipes, bed sheets with Velcro fasteners and black fabric as the bottom layer. We want to copy this construction. It can be set up quickly and can also be used by the children during free play. I already have ideas for theatre plays in mind.

We can use the reading cards from the forest to make a picture book.

We can take the reading cards from the forest play to make a picture book. Our Letter Club can print the text – I have already ordered a letter set for printing.

And here are the „reading cards“ that show the flow of the game and help the children find their way around: 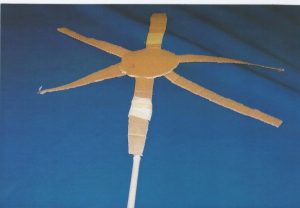 Every morning the sun rises all over the world. 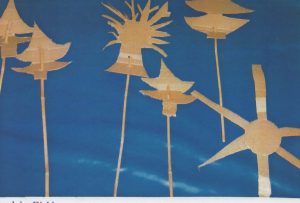 Also in the forest. 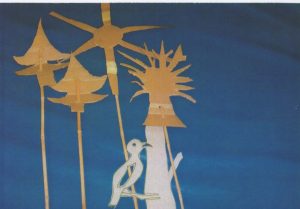 The woodpecker sits on the tree and pecks very loudly. 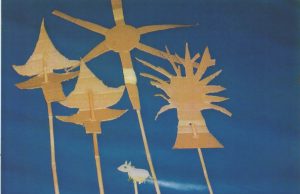 The mouse is a small forest animal. 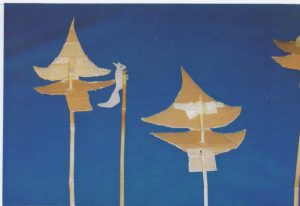 The squirrel hops from tree to tree. 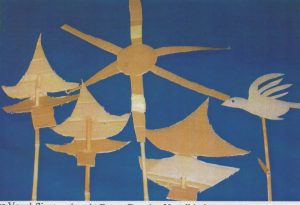 The bird flies and looks for food for its baby birds. 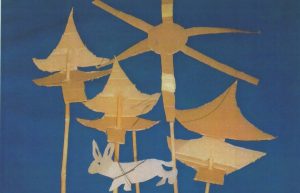 The rabbit hops through the forest. 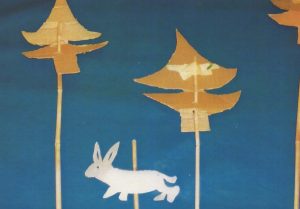 In the evening the sun sets. 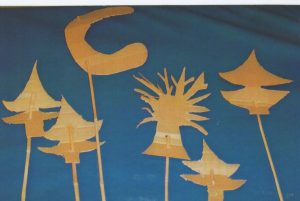 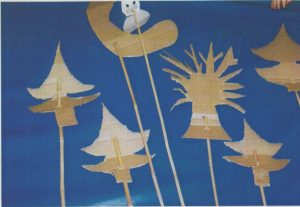 The eagle owl sits down in the moon. 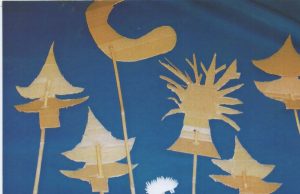 The hedgehog is a nocturnal animal. 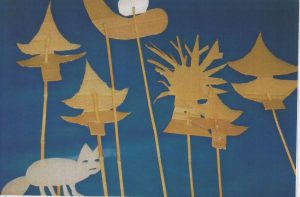 The fox is also a nocturnal animal. 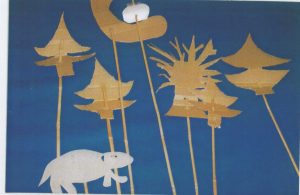 The badger meets the owl every night. 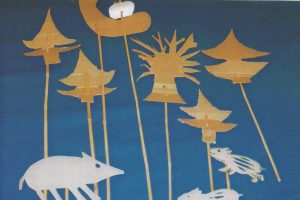 The wild boar mother is called a sow and the children are called freshlings. 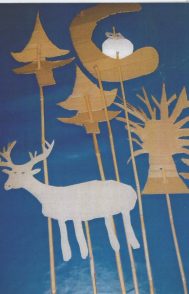 The stag is a very large animal in the forest. 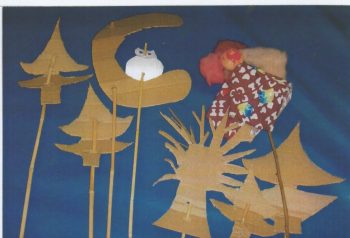 But suddenly the witch comes flying and calls out:
„Rest here in my witch’s forest and turn out the light!“.