I am constantly on the lookout for topics and projects that appeal especially to the highly and especially gifted children in our kindergarten.

I would like to describe two such activities here.

The dead mother from Pompeii

Charlotte, 4 years old, came excitedly to the kindergarten in the morning and told me about the devastating earthquake in Asia. She explained to me that the earth is like puzzle pieces and that they can move.
Hannes (4;2 years), sitting at the breakfast table, explained to us that this is also how volcanoes were formed. Jeremy (3;6 years) tells us about fire-breathing mountains.

Charlotte’s mother said that Charlotte hadn’t been able to sleep at night and that she would certainly have some more questions to ask. I suggested that we could get clever after breakfast by looking at the encyclopaedia and the globe.

Thus began a great gathering of information in the kindergarten and at the children’s homes. Many children, also from the other group, browsed through our literature.

The book by Tilman Röhrig about the eruption of Vesuvius fascinated Hannes, Charlotte and Alena enormously.

The city of Pompeii is destroyed by the eruption of Vesuvius in 79 AD. Flavia, the wife of a rich merchant, does not take the first earthquake seriously, but sends her daughter Pia, her nanny Thekla and her son Stephanos by ship to Rome. Thus they survive, but Pia has to live with the death of her mother.

Actually, we had intended to paint fire-breathing volcanoes. Admittedly, I imagined our wall to be very beautifully decorated with them – but the death of Flavia, Pia’s mother, preoccupied the children, and now also six-year-old Jenni, so much that we started a big community work on it. 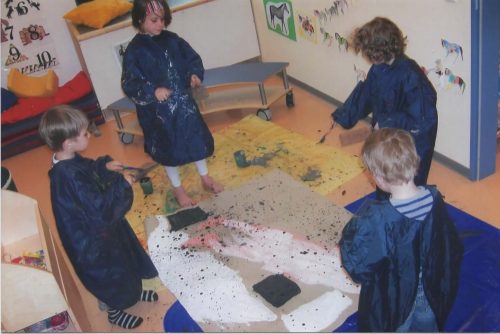 There is a picture in the book that the children wanted to paint. Painting the reclining mother caused problems; Hannes suggested that he lie down on the cardboard and the children could trace his outline.

Using a spraying technique, the lava ash was added. My „observation child“ Alena (5;2) was not there that day, so she did not participate in the painting, but was very enthusiastic about the picture. 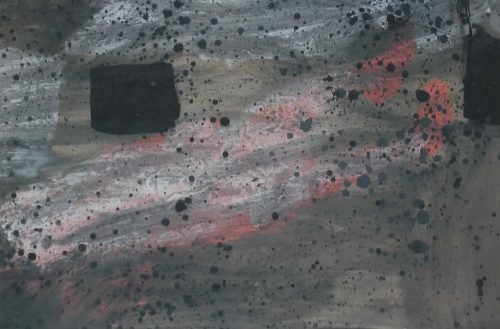 The topic of earthquakes and volcanic eruptions as well as the topic of death yielded us many clever conversations in which Alena participated whenever she was there. But the other children in the group also took what they needed from the „food“. Even Lisette, 1;10 years old and another bright little one, knows that the picture is called „The Dead Mother“.

Charlotte and Hannes are both certainly special to highly gifted children. I am in active contact with their parents. From September onwards, they come to my group as „Schlaufüchse“ (shifters), i.e. pre-school children – even though the parents of both children reject early school enrolment; but one has nothing to do with the other. Charlotte and Hannes have already found each other as friends and now also meet privately.

After my holiday in South Africa, I showed the children photos from a township where many black families live in great poverty.

(Editor’s note: Townships are housing estates for the black, coloured or Indian population, which are designed according to racist political patterns. Many townships have the dimensions of medium-sized and large cities – very often without a corresponding infrastructure. In the period from 1948 to 1994, apartheid (racial segregation) policy became official government policy in South Africa. This further exacerbated the marginalisation of the black, coloured and Indian population and their mass impoverishment. The problem grew so huge during this period that even after the end of apartheid policy in 1994, people still have to live in hopeless poverty in many townships).

I had Gloria Mbalis‘ small project in the township. She looks after and supports a small group of children, similar to our kindergartens. However, this is done to a large extent to protect the little girls from HIV infection. There is still a superstition in many people’s minds that dejuvenating a girl could cure an AIDS patient. Of course, I kept these details from my kindergarten children.

In any case, I was able to tell the children a lot about everyday life in that kindergarten. A song („Das Buslied“) that we sing in German, the children there sing in English. I also described to the children how few toys the children have to make do with.

We decided to send the children a package with pens, sweets, photos of us and self-drawn pictures. The idea was to give some of their own pens.

The children were very engaged. Jeremy (3;6), for example, woke up at night, woke up his parents and said excitedly: „I need pens for Claudi’s children in Africa!“
Hannes (4;2) was sent away for some more time at the paediatrician; he dragged his mother to the shop below the surgery and insisted on buying a packet of crayons „for our kindergarten in Africa“.

In the kindergarten we designed a poster with the photos from Africa and hung it in our group.
We wrote a letter to Gloria with the following questions:

Unfortunately, we haven’t received an answer yet. Gloria has also stopped replying to my emails. I hope that they will be spared from the riots that are going on in many townships at the moment and „only“ have no electricity.

In any case, the world map and the globe are indispensable in our group.

Later we found out that the whole neighbourhood was burnt down; the package came back after three months and we did not get in touch anymore.