by an IHVO graduate (kindergarten teacher).

Bastian (6;1) explains his dream car as part of our project „What flies, drives and swims?“.

I divided the children interested in the project into two groups; Bastian is in a group of 8 children.

In the project, we have already taken a closer look at the „inner workings“ of a car, especially how a petrol four-stroke engine works, and we have also looked at the technical side of cars through books, experiments and software.

Now we meet again and I say:
„Well, if I could build a car myself, if I were the car builder, my car would look different. I would build my dream car.
Do you feel like drawing your own dream car?“

The children feel like it, they all start immediately. I briefly point out the materials provided (pens, feathers, textiles, crown caps…) and can then observe in the background.

During the painting, the children don’t talk much – I had announced that they could present their works later. Without exception, all the children, but especially Bastian, go to work concentrated and with a lot of joy.

Unlike the other participating children, Bastian rolls up his finished picture and ties a bow around the roll. I ask why; he replies, „That’s my secret plan of the car, no one is allowed to see that.“

Knowing Bastian’s determination, I fear his dream car will indeed remain secret and no one will get to see it. I realise that I would have to accept that.

We sit down in a circle.

Emma describes her car like this: „In my car there is a lift. Then people can go up and down in it.“ When I ask what she would have drawn in black, she says, „That’s the dining table and those are chairs.“ Because her car is so heavy, she explains, it needs a lot of wheels; she has drawn them in green.

Nicola, Bastian’s best friend, has drawn lots of aliens inside his car. „They can all look out of the windows – and the ones in the front, they steer the car.“ One of the children wants to know if the aliens built the car themselves or bought it. Nicola answers, „They built the car themselves, you can’t buy that on Earth.“
I ask him what else the aliens built in or on the car. „At the very front,“ he says, „there’s a thick bar. If the aliens crash into ’something‘, the car still won’t break.“

Bastian shows great interest during this and the following descriptions and finally comes forward to introduce his picture after all.

His car is a very fast car, he says. „It has a hundred cylinders, here in the front (piston-like objects in the lower half of the picture) you can see some.“ 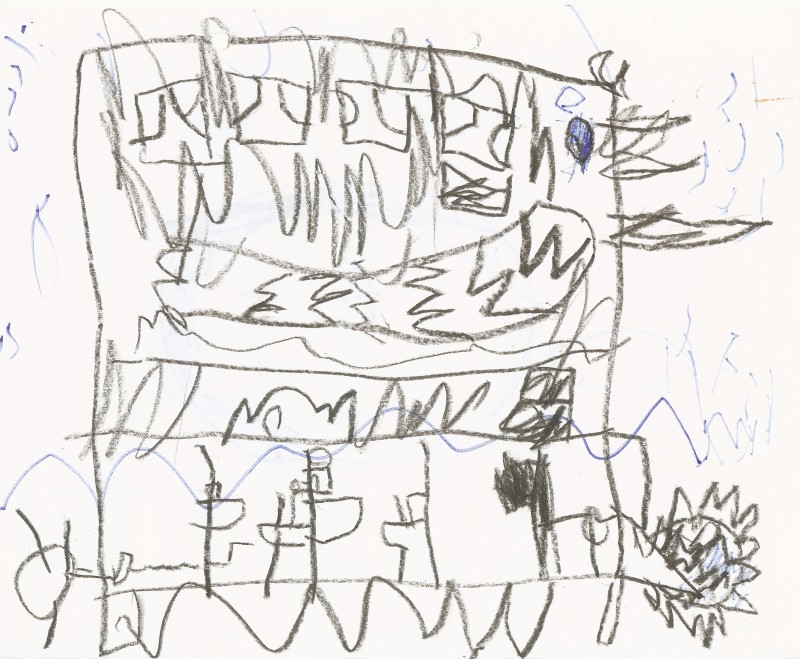 Bastian shows the other children his drawn-in cylinders. „The car is also very strong,“ he points out proudly, „it can even drive through stone! I ask him how it manages that. „It’s quite simple, it has pointed screws with which it easily drills through stone,“ he answers and shows the pointed screws. (They can be seen at the top right of the picture.) „But they have to be activated,“ he adds.

At this time I point out one of our rules of conversation to the children: „You know that you can always ask questions if you want to know something more precisely.“ One of the boys wants to know what „activate“ means. Bastian explains the term as follows: „When the car hits stone, the drills come out and drill the stones.“

I’m still interested in whether the car needs a lot of petrol. „No, it’s wind-powered. It only needs petrol when there is no wind,“ Bastian answers. I ask the other children if they know what „wind-powered“ means; most of the children shake their heads and Bastian explains: „When there’s wind, the car can drive like a sailing ship. It has lots and lots of sails.“ He shows the sails and explains that the car also has a propeller. It can also drive under water.

„Is it driving under water right now?“ asks a child. Bastian answers, „Yes, you can see it well!“ and points to the blue drawing.

I want to know what the one in the lower right corner of the picture is. Bastian: „That’s a cogwheel that digs itself into the sand when there’s a strong water current.“ „Why does it do that?“ I ask. He explains: „When the water current is so strong, the ship drifts. When the gear digs into the sand, that doesn’t happen!“

„You’ve thought of a lot, Bastian!“ I say and ask who is driving the dream car. „Like the Nicola, aliens live in it; the bedroom windows are up there. So even when you’re lying in bed, you can ‚look out‘.“

After this remark Bastian rolls up his picture again, the presentation of his work is finished. However, he is very interested in the dream cars of the children who present their work after him.