Five-year-old Pia (5;6) started writing and I suggested that she make little letter stamps with me. She was immediately very interested and drew letters on foam rubber. She cut them out and then stuck them on little wooden blocks. On the following days they were tried out: always with little words like PAPA, MAMA, OMA…. (Grandma).

The author describes individual support as it should be: The idea comes from the child, the kindergarten teacher supports and encourages it; the child produces new ideas – and follows idiosyncratic learning paths. The teacher accompanies her.
See also: One-on-One-Advancement, Mentoring.
The results flow back to the group as suggestions. A concrete product (book) and a new structure (offer of printing tables) are created. Pia learns a lot in a short time and passes on her experience. Perfect!

Then I wrote her little letters with orders, for example:
„HALLO PIA MÖCHTEST DU MIT WASSERFARBEN MALEN?“ (Hello Pia would you like to paint with watercolour?) or „SCHLIEß BITTE DIE TÜRE“ (Please close the door). Pia didn’t write back. When I asked her about it, she said, „I can talk to you!“ But she then printed for her sister: „WIE WA S IN DER SCHULE?“ (How was it in school?) or „MUST DU HEUTE RECHNEN?“ (Don`t you have to calculate today?) and „HALO SONJA ICH GE HEUTE REITEN“. (Hello Sonja I´m going riding today).
Sonja then wrote her little letters back. After a few days, Pia’s interest in letter printing waned and she turned back to her new friend Solveig from the neighbouring group.

Note from the course leader:
This was apparently enough for her to work out the concept of „letter writing and letter contact“ for herself.

A book with her own rhymes is created

When Solveig was sick for a few days, I noticed that Pia was bored. Because she loved to make up little word games and rhymes, I offered her to print a little book with her rhymes. She was very enthusiastic about it and wanted to start immediately. We decided to start the next morning. Then she came to the kindergarten with the words: „But now we’ll start with my book!“

I had already written down some of her own rhymes in capital letters a few days before
and asked her if she would like to print one of them. At first she said no. But since she couldn’t think of a rhyme quickly that was good enough for the book, she decided to print the one I had suggested. She – and I – had great fun with it. 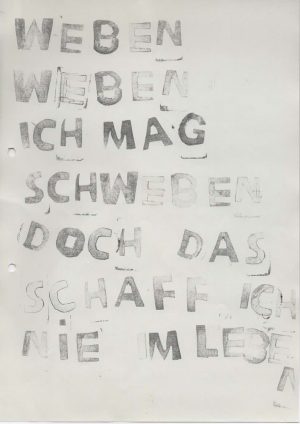 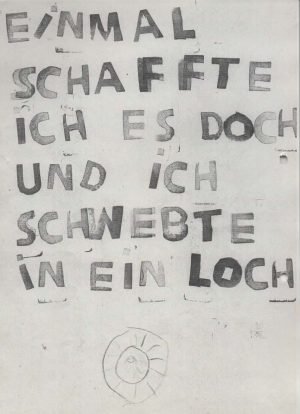 Pia often rhymes out of the situation: When she is working on her weaving frame, she thinks of a rhyme for weaving – or she eats a nectarine and makes a rhyme for it. When she had copied the rhyme with the nectarine, she drew two bees underneath it – and in the process she was already continuing to rhyme. 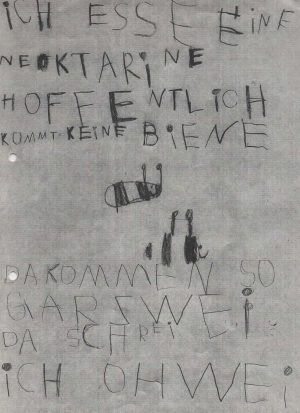 Pia also changes existing counting rhymes that are currently being used in a game. I then wrote down the rhymes and at a later date we printed them. However, Pia always insisted on printing with me alone. As the settling-in phase for the new children was just beginning, I hardly had the opportunity to work with Pia at that time. Then Pia initially wanted to write rather than print. However, she was not satisfied with the evenness of her letters and I had to persuade her again and again to continue writing. 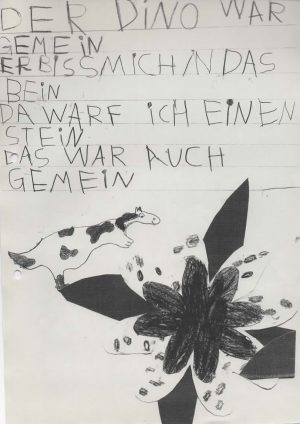 Note from the course leader:
She sets herself a new, more advanced task and has high expectations of her result.

She was very proud every time we filed a rhyme in her book. She sometimes takes the book and reads it herself, but she also reads it to other children.
Pia always wanted to draw or tinker something to go with the rhymes. So the book is completed further when Pia enjoys it.

Course leader’s comment:
Pia has learned a lot. Even though you had little time, your impulses and interest in her project were necessary conditions for Pia’s success. The rhymes and the technical realisation are great for a 5-year-old! 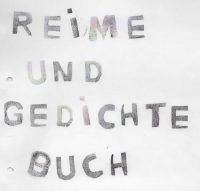 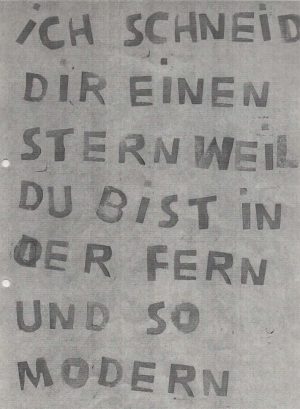 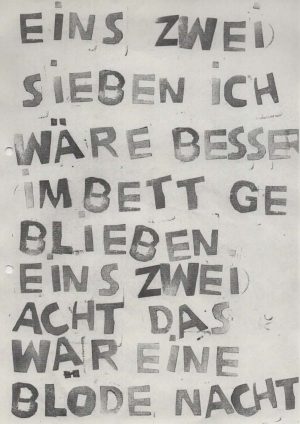 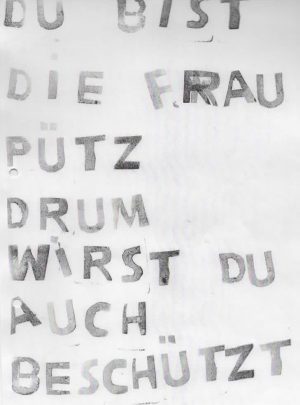 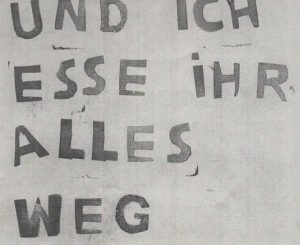 One morning I wanted to measure a book shelf in the group room with a folding rule. While I was talking to a colleague, Pia came over all excited and wanted to show me something.
I saw that she had bent the folding rule in the shape of an „A“. Pia asked enthusiastically, „Do you think I can lay out all the letters with the folding rule?“

I encouraged her to try. But before she continued, she sat down at the painting table and explained, „I’d better paint them on again first.“ She put the sheet of paper with the letters next to her and then bent one letter after the other, leaning the folding rule against the door each time and taking a photo of it.

She was intensively occupied with this
for a total of two hours.

When all the letters were made in this way, I offered her to print out the photos.

Pia then cut out the printed folding rule letters and put them into words. She said, „Oh cool, now I can write with them!“

I said, „You can write stories with the words. What do you think about making up a story and then we write it down in a book?“ She was very taken with the idea. The next morning she came to me immediately and said, „Mrs. Pütz, we can do the book now. I have thought of a story.“

Note from the course leader:
That was a good question at the right time … and that’s why she stays on it.

She then told me the story of the girl with the wiggly tooth – she had lost her first tooth just a few days ago…. She rejected my suggestion to involve other children in the production of the book:

„No, I’ll make the book all by myself with you.
The other children can watch. Then they will see how to make a book
and I will help them later to make a book too.“

Note from the course leader:
There she is amazingly clear and confident. And as described at the end, she keeps her promise to the other children!

We looked at the books in our group. Pia noticed that there are different types of books. When I asked her what she wanted her book to look like, she said: „I definitely want pictures in my book. But she didn’t want to paint, she wanted to print.

We had painted on sandpaper a few days before and then printed with it. I asked Pia if she wanted to make her pictures that way too. She said no. I gave her a piece of thin styrofoam and a nail with which she could paint (= scratch) something on it. We would then try to print with it. She carved her name on the styrofoam and said, „Painting just for the book. Now I’m carving my name.“ I gave her watercolour, thick finger paint and linoleum ink as well as a brush, a small rubber roller and a mirror tile.

She tried everything and found that her printed name was not legible. I set up the mirror tile for her and let her hold her sheet in front of it, „Ah, this is mirror writing!“ She took a new piece of styrofoam, wrote her name in mirror writing, printed it and was happy that it was now legible. When choosing the ink, she decided to use linoleum ink because she had seen that it was not possible to print so well with the other colours. She also enjoyed applying the ink to the tile with the rubber roller. She didn’t know how to do that yet.

We thought about how we should proceed now. Pia wanted to make the pictures first. We came up with six pictures for her story. She completed most of them on her own in one morning. I could only be with her a couple of times at short notice and told her she could fetch me if she needed me – but that was not the case. She didn’t want to have breakfast, didn’t want to go outside and worked intensively with red cheeks on her printing plates, which she then proudly showed to the other children. They became curious and Pia explained to them what she had done.

The next day, we went into the next room with four interested children and Pia showed them what she had learned.

Only after two more days could we start with her prints, which became very beautiful. She also got to grips with writing quickly. However, I had to dictate everything to her again. She was happy: „This will be a real book and there are no mistakes in it. I haven’t learned how to write properly yet.“
The next day, the dried print images were glued into the book and Pia presented her book to the children, beaming with joy.

The children were very taken with it. The four children she had guided now also wanted to make a book. Pia then said, „You know what, Mrs. Pütz, we can get a printing workshop next door!“ She explained: „We need a few tables and then we take the letters we tinkered, the polystyrene and the sandpaper.