After I had already thought a lot about Jonas (4;2), I wanted to find out more about him and give him a evocative task.

Picture Book about the Perchten.

Jonas is always very interested in new challenges and is always open to them. Since he is currently working very intensively with the paper airplanes I fold every day and he would also like to fold them himself, which he has always refused in the past, I folded the individual folding steps in the morning as an impulse and hung them visibly in the group for the children.

Jonas shows what he is made of when he learns to make a paper plane very quickly and independently. A demonstration of the work steps on a board on the wall is enough for him to achieve success. There’s only one point where he can’t get any further and gets help, despite his persevering attempts.

Already in the morning the first children discovered the instructions, for example Sven (5 years) and Jan (6 years). The two have already folded with enthusiasm and have reached their limits here and there. But they didn’t give up and with a little help folded their own plane for the first time. They were very proud of that!

Thinking about Jonas has also made joy and an important learning success possible for some other children.

Jonas hasn’t noticed any of this yet, because he always comes quite late. When he arrived in the kindergarten, the topic of „paper airplanes“ was not as topical at first. 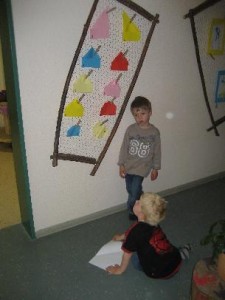 Around 10.30 Jonas came to me and wanted me to fold a plane for him. I took this as an opportunity to show him the instructions. He immediately got a sheet of paper and started with step 1, without even asking a single question. He was highly motivated and focused from now on. After some time other children joined him, but he did not let himself be distracted. 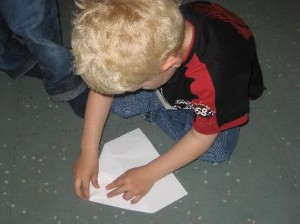 He folded the first steps without problems, but later he too came to his limit. He tried and tried – but with one step he didn’t get any further. He asked me for help. I explained the step exactly to him again, and then he tried it again completely independently and managed it then also to fold the paper airplane finished. A huge glow was to be seen in his face.

He immediately made the first test flights, and the plane actually flew well. Now many other children wanted to fold their own plane and Jonas was often asked for help, which he obviously liked to give to the children.

I managed to challenge Jonas again and at the same time I helped him unobtrusively to achieve one of his goals. He had wanted to be able to fold „this“ plane on his own for a long time. In connection with this action, other children have also taken on a new challenge and have grown a bit. 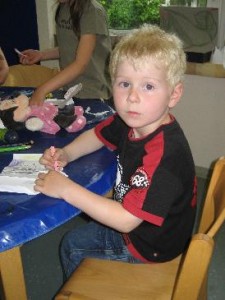 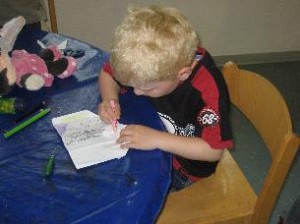 Interpretation of my observations with due caution

I chose Jonas as my observation child because he has stood out from the crowd of children since he entered kindergarten. From the beginning he had something special and fascinating about him, which not only I, as an educator, but also some children noticed.

Jonas was well received in the group and quickly it was clear for some children, Jonas is very useful, because he is very helpful.

His pronounced social behaviour struck me right from the start. He’s always for justice and can’t stand it if someone doesn’t do it. On the other hand, Jonas is also very sensitive and quickly starts to cry when someone has done him wrong or feels he has been treated unfairly.

His strong urge for independence and self-reliance was also striking right from the start. He never liked it if you wanted to help him. He wanted to do everything on his own. He has actually managed many things.

Nevertheless, I assumed that this child was of average ability. Now that I’ve been watching Jonas more intensively for a long time, I’m not so sure anymore. Surprisingly, many indications of possible giftedness apply to him. At first glance I would not have suspected this.

Today I believe that Jonas is at least particularly talented in certain areas.

He is definitely a child who needs challenges and is already very advanced in his development.

In the areas of social behaviour, self-control, language and mathematical-logical thinking, he is at least a little ahead of many children.

However, what is not so important to him are possible characteristics of underchallenge. He is neither depressed nor aggressive or often ill.

On the contrary, he always attends kindergarten very regularly and is usually in a good mood. The only thing I’ve noticed lately is disturbances in the chair or morning circle.

At the moment he plays the clown more often or shows disturbing behaviour, by constant laughing, etc.

He has never shown this before.

Comment of the curse instructor:
If a gifted or particularly gifted child has a supportive family and a good kindergarten, experience has shown that behavioural problems or disorders of the basic mood do not occur in most gifted children until the age of 5. At a younger age there are usually still sufficient and good incentives for their development. But in the 5th year of life the mood often „tips over“ because a permanent underchallenge begins.
Jonas, for example, begins to disturb and clown. One can also understand this in such a way that he often cannot really take the events seriously.

See: Permanent Frustration because of Being Underchallenged and Facing Incomprehension.