is considered given, when an IQ is higher than 130. 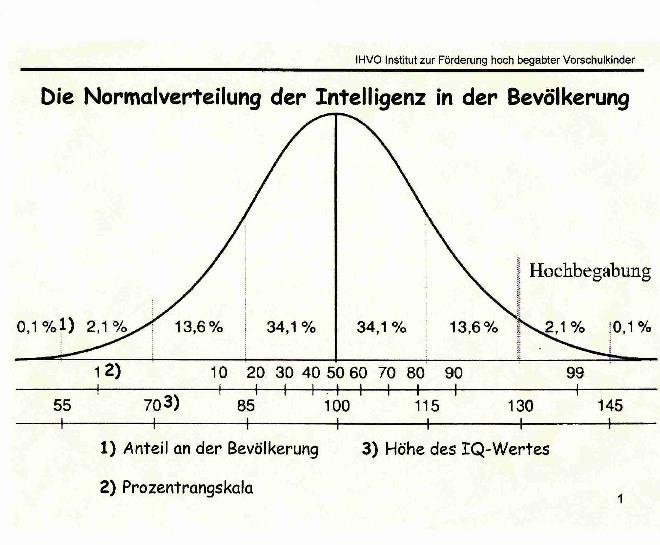 How to read the diagram: The diagram shows for example that 13.6 % of the population have an IQ between 115 and 130 (see the horizontal line at the very bottom). The percentages relate to the partitions between the vertical lines. The surface region portion determined by the horizontal line, the curve and the two vertical lines relates to the amount of people with the respective IQ.

The distribution of intelligence – just like many other natural phenomena – follows the Gaussian Distribution (named after the mathematician and physicist Carl Friedrich Gauss, who lived from 1777 to 1855). This normal distribution appears graphically as a „bell curve“ as its shape is reminiscent of a bell. A similar curve would result if for example the body heights of middle-European women were to be measured and the distribution of these were then to be graphically illustrated by means of a curve. In this case the numbers for body height (for example 135cm to 210cm) would appear on the horizontal line and the number of women with a specific body height of (for example) 172cm would be accordingly marked above the number 172.

In the above diagram the IQ-points are arranged on the horizontal line from 55 and below up to 145 and above (correspondingly the percentages of 10 and below to 99 and above). On the vertical appear the relative numbers, that is the percentages, of people who would reach the respective IQ-score in an intelligence test. This is why there are no actual figures to be found on the vertical. These figures would depend on the sum total of tested persons in an actually performed testing.

However, the prevalent pattern of the bell curve would in any case be approximated by an actual testing procedure as long as the number of tested individuals were not too small. If the number of tested individuals is too small the effect of accidentals will rise and thereby distort the outcome. It is just like playing dice. If played only a few times – even if the die is shaped perfectly even – the outcomes will hardly be evenly distributed. In a set of 24 tries there may be 4 times the 4 but 6 times the 1 and only 3 times the 2 and so on. The greater, however, the set of tries the more evenly the outcomes will be distributed, meaning that the numbers 1 through 6 will appear almost equally often. The exactness of this approximation rises with the number of tries or in other words: a deviation from the mathematically ideal, even distribution of outcomes becomes less and less probable the greater the number of tries.

Most IQ-tests – but not all of them – will discriminate for example between language proficiency and mathematic abilities. Such testing procedures aim at determining a structure of ability from which to draw a profile of intelligence. Therefore one should always inquire the outcomes of the separate parts (and these should be listed and explained in the report given to parents).

A singular score such as „my child has an IQ of 126“ does not reveal anything about the structure of ability. Oftentimes this is simply a mathematical mean calculated from different test scores in separate areas. Sometimes the gifted will achieve high scores in several areas (for example language and mathematics), sometimes a high score is reached only in one area. If then in the evaluation of a test in which a high score was reached in mathematics and a low score in language proficiency is boiled down to a mere mathematical mean of the two such as IQ 126 (= not gifted) this singular figure may conceal the mathematical giftedness of the tested individual.

Another scaling of scores which is frequently used in test reports is that of the percentile rank (PR). A percentile rank of 95 means that 95% of the children in the same age-group would do as well or worse in the test, only 5% would do better.

A child will usually be diagnosed „gifted“ if the child reaches a percentile rank of 98, which corresponds to an IQ of 130.

This threshold value (IQ 130 or PR 98 as threshold for giftedness) has been set arbitrarily at some point in the history of research and has by now been internationally accepted and is commonly in use. This could be likened to the history of the definition of the measurement unit „meter“ in France in the year 1793: before and after – since it had yet to be put to common use – there were rather differing measurement units in use, for example the „foot“, which itself might differ from city to city.

It makes little sense to indiscriminately consider a test score as for example IQ 132 by itself, because:

1.
The debate over the question as to what extent conventional intelligence tests truly measure „actual intelligence“ has not yet come to any conclusion, which after all cannot be expected for as long as scientific research continues to struggle for a deeper understanding of this phenomenon called „intelligence“.
2.
In any measuring of intelligence there is an inherent error of measurement the exact degree of which is unknown to us. The magnitude of this error of measurement will, however, be estimated by means of different methods and based on these estimates the manual of the test will provide a „confidence interval“. The „actual intelligence“ of an individual will thereby be within this confidence interval. The interval extends around the measured IQ within a range of 10 to 15 IQ-points in both directions.

This means: a child with a measured IQ of 132 could „actually“ have an IQ of 141 or by the same token an IQ of 120. In the latter case the child’s IQ would be below the threshold value for giftedness (which was defined arbitrarily at some time to begin with).

3.
Especially when it comes to measurements in the high ranges of intelligence tests tend to be rather inexact, because the portion of gifted examinees who were tested during the calibration phase of the test was too small. During calibration of the BIS-test this known structural weakness was counteracted by intentionally including a large number of gifted examinees in the sample.*

4.
The problem called „ceiling effect“. The gifted often solve all problems in the test, they may in parts or on the whole of the test „hit the ceiling“. When this happens there is no determining whether they would have solved even more or more difficult problems. We may constitute that their intelligence exceeds what can be measured by the test, but we are unable to measure the scale of that excess.
5.
Sometimes a gifted child will encounter the problems presented by a test with little motivation (and therefore with little success) if the problems are too easy. This, too, will bring about questionable results.

In IHVO-Certificate-Courses, which aim at the development of an improved advancement of gifted children (and those who are assumed to be gifted) in kindergarten/pre-school, it has proven purposeful to use – aside from the term „gifted children“ (for the 2-3% with an IQ of 130 and above) – the term „children of extraordinary ability“ (for all children with an IQ above 115), thus defining a new ability grouping. 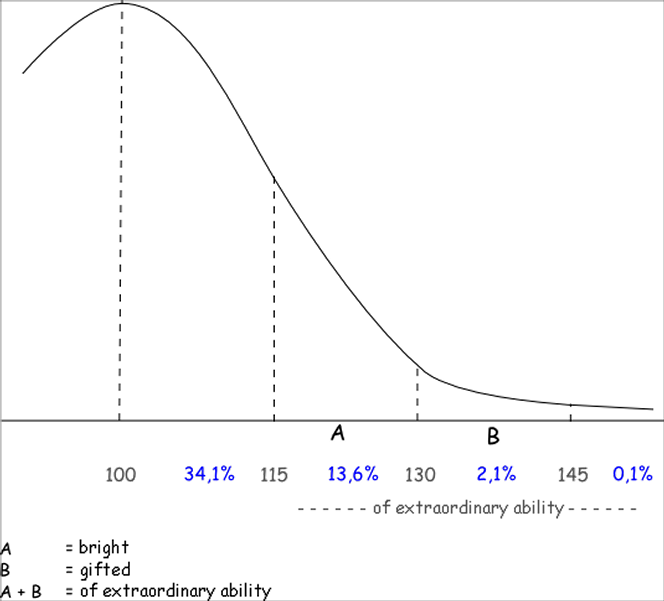 There are two reasons for this:

Experience shows that special advancement efforts which aim at the gifted will also have a positive effect on many of the very smart, talented and interested children.

Being that children in pre-school are rarely tested the boundaries between the two respective groups are mostly blurry.

Nevertheless it is important for us to use the term „gifted children“ since our efforts do aim at providing specifically for their needs and demands. For the gifted it will just not do to simply offer a little more education and challenge.

* Intelligence tests are calibrated just like any other measuring instrument before they are sold or applied. To ensure a qualified calibration thousands of examinees must be tested. This means that for a test for the 5-10 year-olds thousands of children in that age-group must be asked to solve the problems in the test. These results must be evaluated – and if necessary the problems must be altered and applied once more in another testing procedure and be evaluated again until the required quality criteria for intelligence tests are met.