We had a long-lasting project on the topic of “Art” going on at our kindergarten. At the same time the children were still involved in the rather comprehensive Project: Time. In the following project these two fused naturally.

The gym had been transformed into a giant artist’s workshop for the art project; there the children were able to try out different creative techniques. One colleague oversaw the activities – she showed the children how to use paints, brushes, chalk and other materials. She also made sure there was a positive working atmosphere. The activity was open to all children of all groups: four children of each group were allowed to participate at a given time.
Simultaneously there were other projects going on in the separate groups.
In my group we started out dealing with the human body as a means of expressing emotions. The children would pantomime activities from everyday life.

When one of the children told us about a wax figure museum we decided to make sculptures. We used our own bodies, light and a camera. The sculptures so created were really the shadows of the children as they were posing.
In those days I kept trying to figure out how we might be able to bring in the topic of ‘time’. One night I was dreaming of a picture I had seen in a book when I was a child. There were clocks in it which were ‘hanging’. 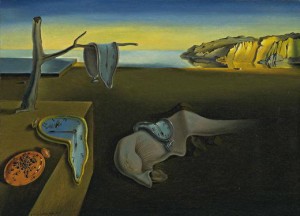 I found out that it was a painting by Salvador Dalí. We found it on the internet and made a print out of it on a letter size sheet. The picture is titled “The Persistence of Memory”. It is also known by the titles “The Soft Clocks” or “The Melting Time”.
So I decided to take a philosophical approach to the nature of time with the children and simultaneously to create our own painting.

The author is combining two already on-going projects: “Art” and “Time”. She and the children are working on their own version of a painting by Salvador Dalí leading them to a deeper understanding of the term “time”.

One morning I spread a red blanket on the floor for our morning circle. The children were quiet and anxious to see what was about to happen. The CD player was playing the Pink Floyd song “Time” – at its beginning there are sounds produced by several different clocks: ticking, sounding and ringing. I produced several clocks from a silver box and put them on the blanket. There were wristwatches and alarm clocks, some running, some out of order. 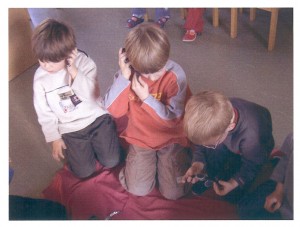 The children examined the clocks, held them to their ears listening, tried to get the alarm clock to ring. They counted the clocks. They were aware that the clocks were instruments to measure time.

After a while I asked the children what the clocks felt like. “They’re hard.”
“Why?”
“Because they’re made of metal.”
Then I ventured the next question, a rather difficult one: “What does time feel like?”
The children couldn’t think of an answer. I repeated the question and waited. Eventually Jan said, time was soft.
“Why?”
“It moves.”
“Can you touch time like you can touch a clock?”
“No!”, said some of them.
“Why?”
“You can’t do it.”
“Time always goes like this:”, said Jan and made moves with his hand indicating circles.
Then I told the children about an artist who had also been pondering the nature of time. He had said the same thing as the children, that it was soft, and he had thought about how he might be able to make a painting of that. I showed them the picture and told them about its making.
Salvador Dalí was on holiday in a beautiful landscape together with some friends of his. One evening, when having dinner, melted camembert was served. After dinner was over the artist remained seated at the table having some thoughts about the passing of time, about its softness, then he went to his workshop, saw an unfinished painting of his with a landscape on it and he added soft clocks to it.
The children were listening to the story while beholding the painting.
“What’s soft in this picture?”
“The clocks.”
“What’s hard?”
“The mountains, the table.”
Then Jan discovered the tree and said that the tree was “dead” now, but when spring came, new leaves would grow and then the tree would not be “dead any more”.
That is how he recognized the difference between the lifeless, hard mountains and the seemingly dead tree: time would revive the tree (soft in time), yet the mountains would remain dead (hard in time).
“How did you figure that out?”, I wanted to know.
“Because on one of the branches the clock is hanging like a pancake, and when it ticks again, spring comes and new leaves are growing.”
“That’s interesting”, I said and inquired whether we should also make a picture like that.
All children liked the idea and I told them that we would go about it that same afternoon.

How should we go about it?

Now I started pondering how to go about the whole thing. I thought it important that the children make it a collaborative effort, so that they could contribute their individual interests and talents, and – needless to say – so that it would be a success and the painting would turn out nice. I tried a few painting techniques, among them “wet on wet” but the results were not satisfactory.

How could the softness of the clocks be depicted?

I did not intend for the children to simply copy the painting. Then I remembered the pancakes and considered making actual pancakes and placing them on the picture. The thought that they would get mouldy within a few days let me dismiss the idea, though.
Plasticine, however, does not get mouldy. I bought some Fimo-Plasticine in two colours – it is perfect for making good, durable, soft clocks.

This is how our painting became 3-dimensional. A large carton box was first lined with white paper, then the landscape was copied on the inside: the mountains, the sky and the darkish plain. A smaller shoe box was painted brown and fixed to the side of the picture. We stuck a branch into it. The indistinct object in the middle of the original painting we improvised with scrunched-up paper and also stuck it to the inside. 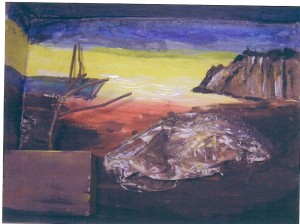 The next day the children made the clocks and hung them into the picture. 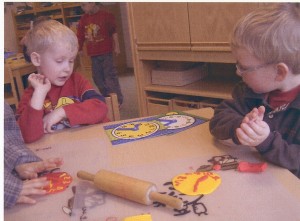 As I had planned, there were several children involved in the project.

Aaron, 4;5 years
He loves painting and shows great perseverance when doing so. His great joy shows clearly in his posture.

Leo, 5 years
Usually he keeps low profile, but when he saw that we were going to make clocks out of Plasticine he spoke up and insisted that he be allowed to participate. I was quite surprised by his strong motivation. He did make a clock and showed great dexterity and perseverance.

Linea, 5;6 years
She was beaming with enthusiasm for the creative process.

Sven, 4;4 years
He understood that this activity was something very important for him. He participated in all phases of this art project. He coloured the inside of the carton box and mixed colours, then he formed a clock out of Plasticine. He insisted that everything be done with great precision. So he took a clock with mobile hands and put the hand on it to the next hour, each time before laying down the hour marks on the face. He showed good dexterity and, of course, it was obvious that he knew all the numbers.

I cannot quite tell just how talented he is. What always strikes me about him, though, is the enthusiasm and joy he shows with regard to extraordinary activities. He gets involved with all his heart and he is able to concentrate for a long time. He has also gathered quite some knowledge about different things and he likes telling us about them.

Jan, 5;3 years
He is quite a brain. One can tell that he has thought about a good many things – and he tells us about his conclusions.

As opposed to most other children, who will answer questions by drawing from their acquired knowledge (either they have that piece of knowledge or they do not), he is capable of coming up with an answer by reasoning.

Facing new problems he applies analogy and comparison, or gives a random answer and verifies it. That is something he really enjoys. In a way he is even able to recognize what his counterpart is driving at and therefore often gives an adequate answer. He shows empathy for others, he can tell if he has hurt someone, and he does not need to be reminded to apologize.
The actual realisation of his ideas is not of great importance to him, oftentimes he will not even finish a task. He set no great store by his version of a clock – it was a circle with two hands.

Other children
Again and again other children took part in the activity. Once during the morning circle the whole group experienced a wonderful meditation while listening to the music of a rock band which I was quite excited about when I was young. This addressed several of their senses: hearing, eye-sight and feeling.

The children could see it for themselves: the clock on one hand and time itself on the other are two different things. The first being concrete and material, you could touch it, hold it in your hand, set it, hold it to your ear and listen; the latter, even though it is common knowledge that it does exist, cannot be held in your hand. It is perceived indirectly in that things change, grow, age, and through the ticking of a clock.

The clock is hard and solid, time is soft and it changes.

On a clock time can be observed in its passing – its hands move.

Also, some things change in time, for instance a lifeless branch is revitalizeded in spring, the rock always stays lifeless.

When you make a soft clock, you can depict time with it. The soft clock represents life.
This was how the other children were able to relate to the thoughts of the artist.

Most of the time the other children just stood by, watching closely what Sven, Aaron and Jan were doing. 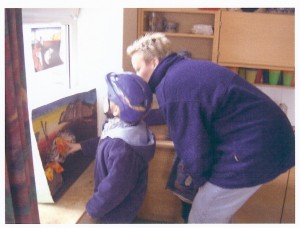 Our piece of art was marvelled at by the parents for several days, the children always explaining how it was all about time.

The participating children experienced themselves as artists, they were proud of having created something beautiful.

This then had an effect on the attitude towards drawing/painting, as it was with Sven, who was rarely to be found at the drawing table, because he does not like his own drawing.

In those days he learned a lot of drawing techniques that do not require fully developed fine motor skills, techniques that have more to do with the joy of experimenting, imagination, courage and chance.
He has grown in confidence with regard to his creative powers. So have the other children. 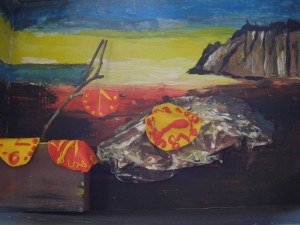 Projects should be social and holistic affairs

Contributions of some turn into something that connects all and belongs to all. I always make sure that my projects are like that.

And yet, there is much more to it: several domains of the child’s development are being addressed, from the most elementary sensory experiences and the training of the perceptive faculties to philosophizing and creative thinking.

That is what I call holistic learning.
The domains addressed in this project were:

In all these domains there is a good share of creativity:
creating something with one’s own hands and producing new thoughts and ideas.

What I have come to understand better now

In the article The Advancement of Mathematical Talent in Kindergarten I have taken a separate look at the exact mathematical contents of this project (with regard to gifted children as well as to children that are not gifted).