While Felix (5;1) is drawing, I set him small addition tasks, first in the tens space, then up to 20. He enjoys it and quickly learns to master the 10 hurdle in arithmetic.
I explain to him how to subtract – and up to 10 he can quickly solve the tasks set. He enjoys mental arithmetic so much that he keeps coming to me to do arithmetic in the outdoor area.

Ilka, when getting a picture book for her 4 th birthday, said to her mother: “That’s not fair: everybody’s able to read but me.” Was she just babbling away?

Soon after the family is off for two weeks of summer holidays and she has packed the reading primer by which her mother had learned reading many years ago and which was in the shelf with Ilka’s picture books. Now her parents won’t be able to say they don’t have any time helping her learn how to read. Ilka works herself through the entire book within two weeks, oftentimes wanting to do another and yet another page.

At the end of the vacation she can read. Words like “TELEPHON“ (telephone)  or “AMPEL“ (traffic lights) she writes correctly and without help or having to practice them. This shows an extraordinarily high learning tempo.

Leon, 4 years old, is fascinated by just about everything that has to do with technology, particularly when electricity is involved. He is always bringing things he is currently occupied with to kindergarten, and he explains what they are all about. For this he mostly turns to me. If I do not give him enough attention he will follow me around until I have taken the time to hear him out. He also likes to talk and tell stories. If he gets too little attention he will raise his voice and wait to see everybody else’s reaction.

He has quick apprehension, he is always learning something new and he wants to communicate his knowledge. For instance, he watches science documentaries on TV with great enthusiasm and perseverance. He then talks about them and manages to give correct accounts of the processes he has seen there.

At kindergarten he once spent a whole morning spanning electrical wires made from woollen threads all across our room. He inspired five other children, three of them in their last year before school, to join the activity. You had to make your way through a whole network of threads just to get to the next room. All the while he kept installing new junction points. Over the following days, this game was being continued by the children.

Another day he wrapped a roll of toilet paper in gold foil, attached pipe cleaners to it and declared he had built a solar cell. He elaborated that sunlight would be turned into electricity inside the solar cell and a current would flow to the electric outlet.

At first Leon had had great problems getting acclimatized. He would not approach other children and did not play with them. He told them about electricity, but they just could not follow him.

Aside from that he would just observe. Games played in a circle he rejected categorically. It was only after some time, when we had shown some appreciation of his interest in electricity, that he began to take up contacts with the other children. By now, he is well integrated in the group and has made friends.

Most of the time he is friendly and in a good mood. He will only have a fit of rage when being asked to do something he is not up to at the time.
When asked to abide by general rules, he sometimes lets me know that next time he will invent something that makes him invisible. That way I won’t be able to tell him what to do.

Unfortunately I do not remember where I originally found this beautiful pie with the maze; many years ago I discovered it somewhere and photocopied it. The artist who created it may excuse the robbery. 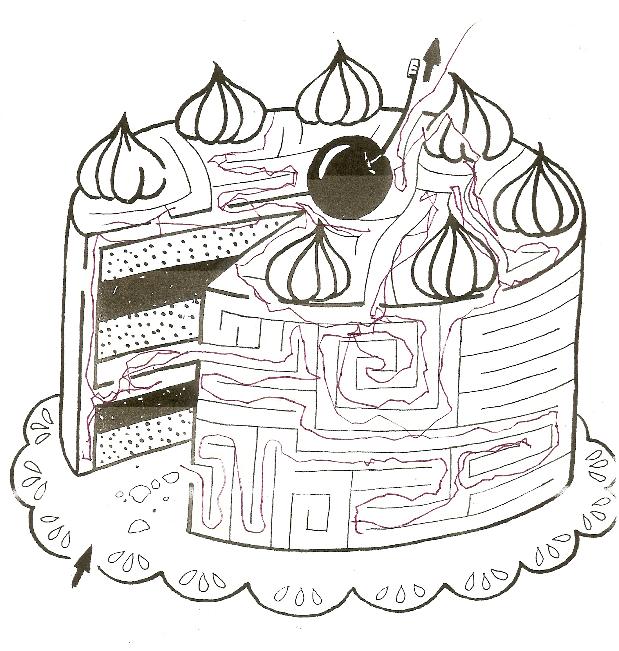 Pete was 3;6 when he found this sheet. He asked: “What is this? What do you do with it?”. I told him that you could take a pen and draw a route through the pie, that there is only one way – and that you would have to turn around and go back if you got lost, so far back that you could try another route. He then got busy. The only help he needed was on the upper right: “The route goes through the cream topping.”

In the months before he had again and again taken out the picture book “Who finds the way?” and he was therefore well trained doing mazes. I was still quite surprised to see him go about it with such self-confidence, after all there had been plenty of 5-6-year-olds struggling with this task. Pete would even foresee the dead end at some points and avoided taking the wrong turn.

Strikingly quick learning may be observed in all developmental domains. Teenagers who are verbally gifted, for example, may catch our attention by speaking fluent Hungarian after three months of their student-exchange year in Hungary – and Hungarian is not easily learned by Germans, it has terrifyingly little in common with German.

But at pre-school age, too, occur swift learning processes, but often unnoticed. I once asked a five years old boy, who was presently occupied with multiplication problems, which were “actually” not to be “dealt with” before second grade:

“How did you learn that?” (No one had taught him nor practised with him.)

He shrugged and responded:

Apparently learning Arithmetic, from simple counting to adding and subtracting, finally to multiplying, has not only set in at a very early stage but has also advanced rather quickly. Bear in mind, most children will need 3 to 4 years for the same learning process. And many children do not only need much more time, they also need a lot of practicing, tutoring, and they often experience the learning process as cumbersome.

Other children learn strikingly fast, things like: drawing wonderful pictures or taking things apart and putting them back together again…