Scientific thinking and acting can also be practiced with very few resources.

I would like to demonstrate this with an example. In 2001 I led a play and learning group for gifted pre-school children in Düsseldorf (Germany). This offer of the Adult Education Center took place 10 times as planned, each meeting lasted one and a half hours, in the afternoon in weekly intervals.

The seven participating children were four boys and three girls aged 4;8 to 5;6 years. Except for two girls, they did not know each other, and they did not know me or the room where we met. I had to bring all the material with me and take it home each time. Despite these unfavorable conditions compared to the kindergarten, a joyful and intensive playing and learning took place.

Seven presumably gifted pre-school children are involved with the chicken egg. They examine it thoroughly and pursue the exciting question of why eggs begin to swim in water with increasing age. And they figure it out.

We spent the 10 afternoons dealing with different topics, one of which was „The Egg“. The children should be able to explore the hen’s egg thoroughly, to make discoveries and to learn about it.

What was important to me was that the children

which are all basic scientific procedures.

The children received uncooked and cooked chicken eggs, which they could take apart and examine. The children discovered what the egg looks like inside, how it smells and feels.

All the observations the children made were collected in the group. The most important thing was an exact description and precise formulation.

It was interesting to see that the children were always specifying themselves, but also each other. 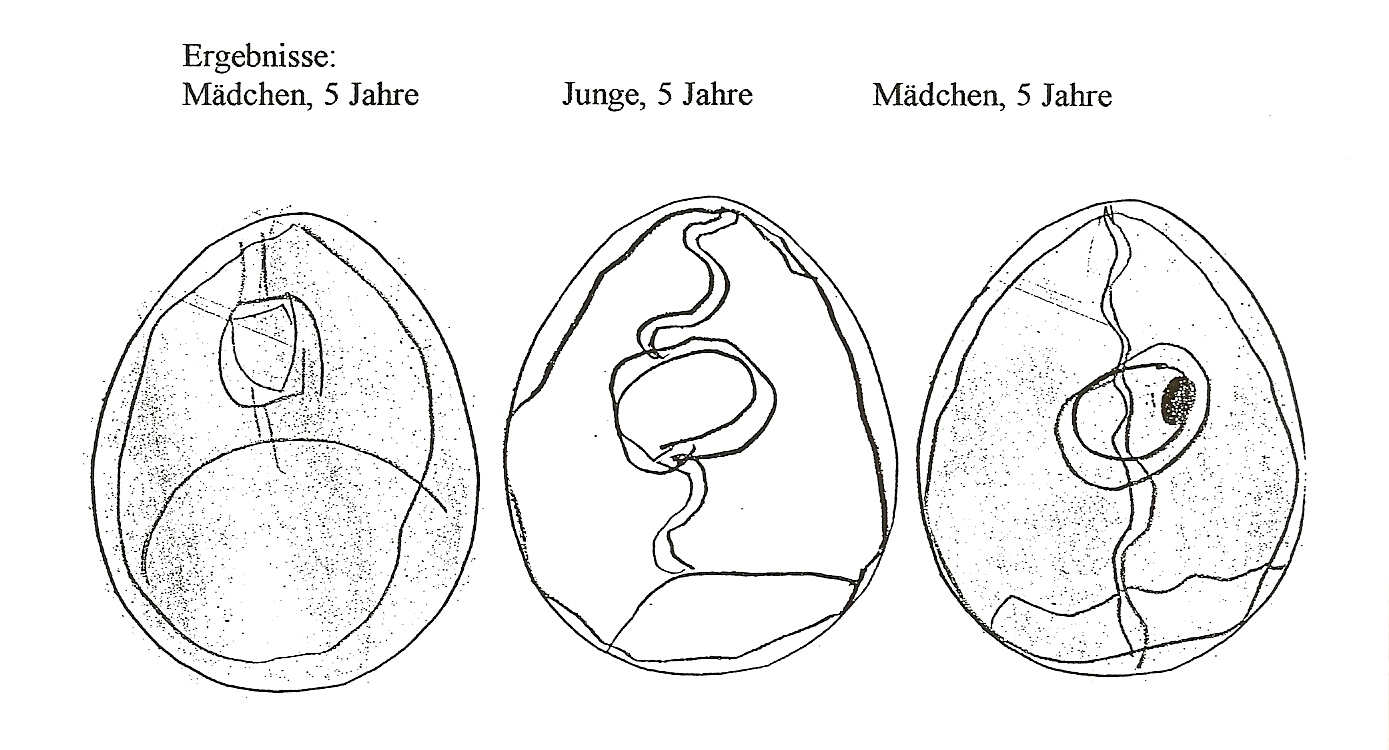 With the help of sketches and from photos I brought along, the details of the egg were brought together with the development of the chick in the egg.

The children puzzled about what „subject“ they would have had if the whole thing had taken place at school. (They were all still months to years away from enrolment.)

After I had listed the usual school subjects (and what is done there), they found at the end of this discussion that it must have been a mixture of natural science and German and art. I found this assessment remarkable.

To find out more about the hen’s egg, I suggested the „egg freshness test“ to the children. (The egg is fresh when it is left in a bowl of water at the bottom.)

After the children noticed that some eggs stayed on the floor, some stood up in the water and some even swam, everything revolved around the question:

Why is it so different?

The children received some important information: From their drawings of the egg structure they found out,

They were not yet able to process this information in their minds to the point where they came up with the solution why some eggs float and some don’t.

This „egg freshness test“ should therefore keep us busy for weeks, which was not originally planned. Every week we repeated the freshness test, always with the same (marked and initially fresh) eggs and observed how the position of the egg in the water changed from week to week. The eggs endured the multiple back and forth transport and also the handling of the children until the end without breaking.

Since some of the children were keen to write on the blackboard, we also looked at the egg from this side:

The children painted ovals on the blackboard and all the other geometric shapes they could think of. They considered in which words „Ei“ (the German word for egg) occurs and wrote them (with more or less instructions) on the blackboard, partly also on paper.

In the process, I also gained incidental information about the children’s reading skills: Of the seven children, two read fluently, two spelled slowly, the others knew more or less letters.

The exchange of knowledge about the living conditions of the chickens as well as a discussion about it rounded off the topic for the time being.

But still we had the secret why some eggs do not swim and some do, not yet revealed.

At the 5th meeting, before the autumn holiday break, we repeated the egg freshness test one more time. The eggs, which were initially still quite fresh, had naturally aged. The children had observed over the weeks how the position of the eggs in the water had changed and could describe this well.

They received a prepared sheet on which the first three states were already drawn by me.

They should now draw in their assumption about how the eggs would be in the water after the holidays. After the holidays we wanted to do the test and draw the actual position.

This task challenged the children’s ability to make assumptions about future development. At the same time, they learned that observations made during the experiment can be recorded with simple sketches. 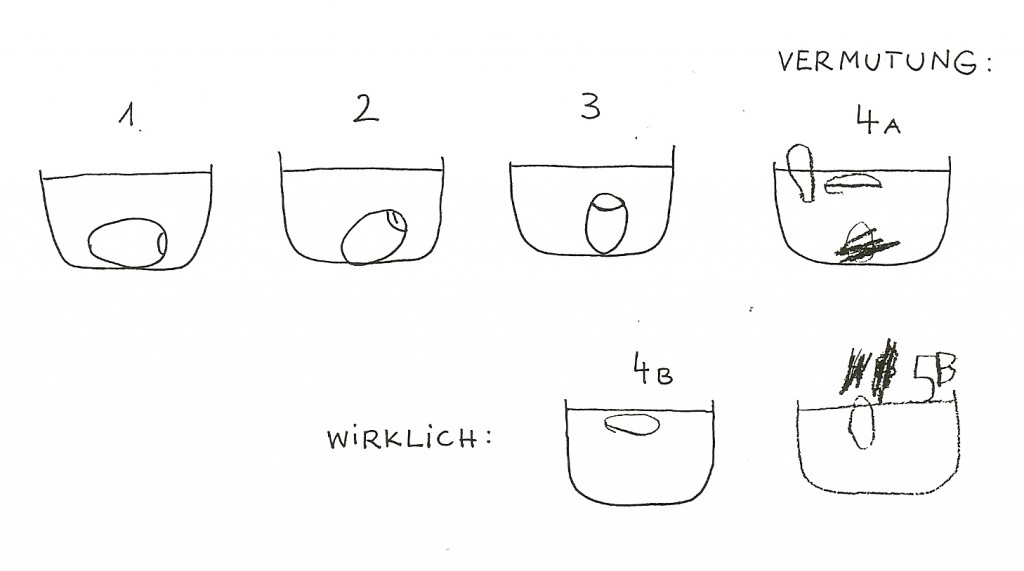 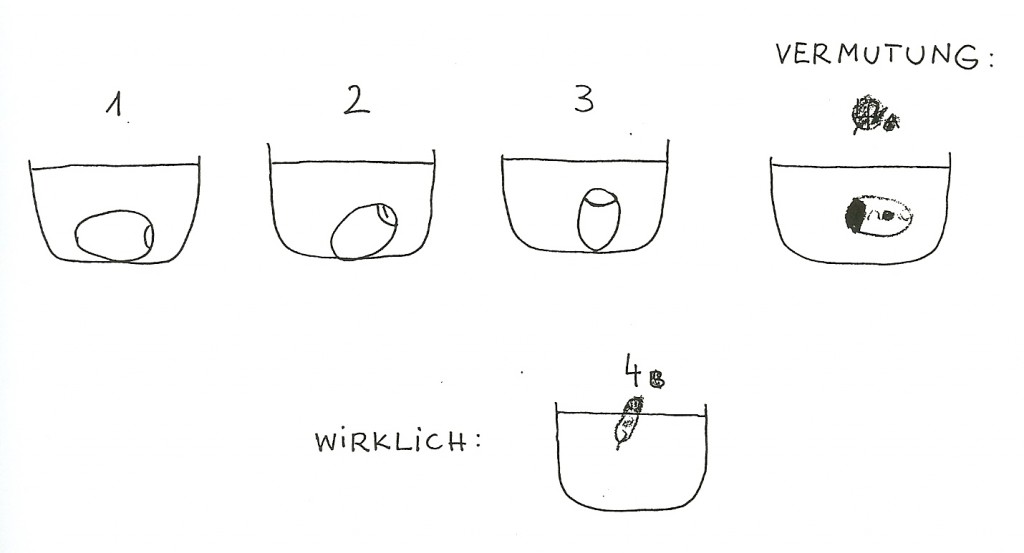 After the holidays it turned out that the children had guessed right in principle:
that the eggs had come off the ground.

However, several children now noticed that the eggs were not floating in the water, but were really swimming, i.e. partially emerged from the water. They drew this exactly.

Now it seemed to me that it was time to help the children to find out the reason for the newly acquired swimming ability of the eggs.

The question was: Why do the eggs swim now?

First we looked at our drawings of the egg’s interior again.

On the question: which part of the egg could be important for swimming? the children came to the air chamber, because they remembered the earlier comparison with swimming wings.

The next step was the question: But in the beginning, when the eggs were still fresh, they already had an air chamber and still could not swim. What happened to the eggs that they can now after all?

After the humorous remark of a five-year-old girl: „Maybe somebody blew them up“, the children, after thinking hard, came up with the idea that the air chamber might really have gotten bigger and the rest of the egg smaller.

The next helpful question was: Can anything get in and out of the egg, even if the shell is intact? Here the children remembered the fine holes in the egg shell and said yes.

The final question was: What went in and what came out?

The children said that air had probably come in and that the air bubble had become larger. Something must have come out, but what?

A brief analogy was necessary: What happens when washing is dried on a line? Answer: The water comes out. Question: Where does it go? Answer: Somehow into the air. Question: Can this also happen with an egg? Is there any water in the egg? Answer: „Yes, I think so; it feels all wet. especially the egg white.“

The children had used their little grey cells to solve a mysterious case and were visibly satisfied that they had made it.