The terms giftedness and intelligence are sometimes used indiscriminately or synonymously (= as if they had the same meaning). Therefore there is talk of giftedness as soon as an IQ testing produces a result equalling or exceeding 130. So what is the difference between the two terms?

Neuro-physiological research may be of increasing importance in this research once imaging techniques enabling us to look into the brain, actually watch it at work, are further enhanced and thus become more substantial.

There are many different definitions of intelligence, for example: According to Perleth (Perleth/Ziegler 1999) intelligence is „the general ability to think and solve problems in situations which are new to the individual, i.e. which are unfamiliar due to a lack of prior learning experience of relevance“.

Intelligence thereby designates the capability to think – or more precisely – to diagnose and solve problems by way of thinking – and the capacity to acquire and adequately use the necessary knowledge (= conceptions / representations of the world).

Psychological research strives to ever more precisely identify and determine the exact elements underlying this problem-solving ability, in other words to find out just what exactly human intelligence is made of.

To which degree is intelligence composed of good memorizing, or of the faculty of logical, systematic thinking, or is the speed of thinking of extraordinary importance, or is it strategic thinking that makes the difference?

The more technical literature one reads the more clearly evolves the notion that effective problem-solving requires quite a number of cognitive processes all of which must be working very effectively. Some of these are logical, systematic, comprehensive, critical, strategic and creative (imaginative and divergent) thinking. Experts also agree that in addition rather diverse memorizing processes contribute to intelligence: These include a.o. range, accuracy, speed, selective attention and integration when accumulating and retaining information as well as similar processes when recalling necessary information from storage (= memory).

In the course of psychological research different concepts of intelligence have been developed in order to shed light on what intelligence is. Rather intelligible descriptions of the differing approaches can be found in Holling a.o. (2004) and in Funke a.o. (1998) (see list of recommended literature). From these two books we have chosen two concepts which build from older concepts and which we would like to introduce here: the Berlin Model of Intelligence Structure and the theory of fluid and crystallised intelligence.

The Berlin Model of Intelligence Structure (BIS) was introduced by Jäger and his staff in 1982. It is presently regarded as one of the most progressive psychometric models. (Psychometric models are to render possible the measurement of individual intelligence by means of testing). According to this model the following faculties constitute intelligence:

there are four operational capacities of importance (these will be explained further down in the text):

The resulting 3 x 4 combinations are conceptualized as a matrix forming a rhombus: 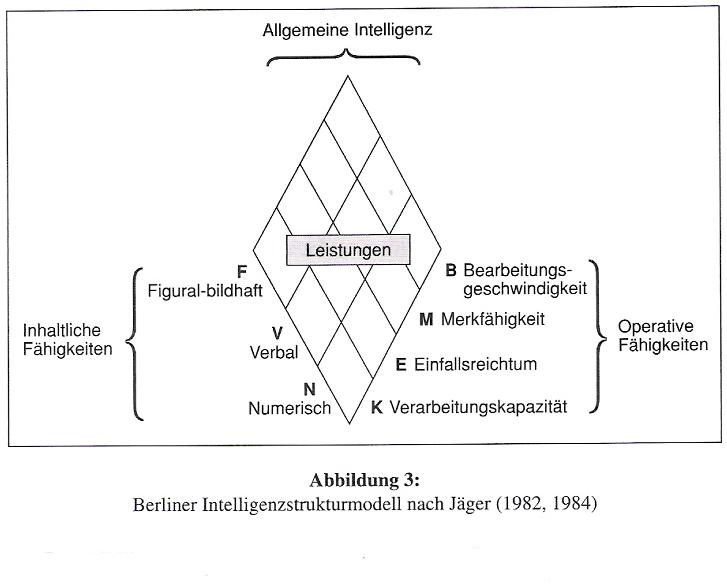 is the speed at which a person processes information. This is usually measured by means of tasks which are rather easy to perform (so easy that pretty much anybody could perform them given they had enough time) – but: this is about correctly processing as much information as possible in little time. Such a task might be of the kind: Cross out every „A“: GVUALOPÜAMMHSEADABPOA.

is the ability to memorise many details and recalling them correctly, a possible task here might be: Read the following words, cover them up and write the ones you remember on a blank sheet of paper.

is the ability to come up with as many meaningful solutions to a given problem as possible. An example for this kind of task could be: Draw as many recognizable objects which each including a circle as you can.

is the ability to process complex information in order to solve problems that cannot be solved straightaway; finding a solution may require considering a number of different pieces of information which have to be evaluated appropriately and then combined in a logically correct manner. An example would be to evaluate the different clues in a murder mystery, to consider and combine them and eventually draw a logical conclusion.

Handling many of the intellectually more demanding tasks of everyday life requires all of the four above mentioned abilities – in differing proportions: Oftentimes the speed of data processing is vital, specific pieces of information must be memorised, new ideas have to be come up with and given pieces of information have to be assembled in novel fashion, finally the right conclusion must be drawn from given information.

Intelligence tests based on the BIS are only available for subjects who are 12 years of age or older.

The BIS-based intelligence tests include specific problems for each of the 12 „structuples“ of the matrix, which have to be solved by the subject (the person to be tested).

This is an example of a problem testing verbal creativity (taken from Holling a.o. 2004):

Since there are enough problems for each of the 12 „structuples“ all faculties regarded as constituents of intelligence are covered and adequately weighed.

The second model, the theory of fluid and crystallised intelligence, was developed much earlier in the 1950s by Raymond B. Cattell, yet it is still of great relevance to the understanding of intelligence.

Based on the results of his research Cattell assumed there be two factors constituting intelligence:

1. Fluid intelligence.
It is the native operational capacity of the brain independent of the learning experiences possible in a given environment. It is, however, not invariant but will change due to genetic and aging processes.
2. Crystallised intelligence.
It is based on learning experience and acquired knowledge. It includes both factual knowledge and procedural knowledge (abilities and skills).

Especially the idea of investing is of great pedagogic merit.

When we come to realise that highly intelligent children from the moment of birth on absorb and process information quicker and more effectively than children of average intelligence, what follows is that they build a considerable and comparatively large background from early on consisting of

1. many conceptions and representations of the world which

Thus our observations in kindergarten become comprehensible, namely that highly intelligent three-year-olds already dispose of thinking capabilities (cognitive programs) which are only much later developed by other children, for example „social shame (I am embarrassed)“ or the program „risk evaluation“.

This seems to imply the conclusion that at least when properly encouraged the difference between highly intelligent children and not so intelligent children increases over time with regard to range of knowledge and quality of aptitudes. A prevalent observation in kindergarten could be explained by this in a first approximation.

Personally I like conceptualising intelligence by drawing an analogy between the brain and the computer on the basis of the latest scientific findings. In this I rest upon Gopnik, Meltzoff and Kuhl’s baby research. They are high- ranking American scientists who make their research and their findings available to us in a very comprehensible way (see the book „The Scientist in the Crib“).

„Thinking of babies‘ minds as computers made of neurons and programmed by evolution makes us see babies differently, but it also makes us see computers and neurons and evolution differently. The baby computers must be much more powerful than even the most impressive product of Silicon Valley. Bill Gates’s little daughter has already solved problems that Bill, with all his billions, is still unsuccessfully trying to crack. The new developmental research tells us that Baby 0.0 must have some pretty special features“ (p. 6f.)

The authors describe their experiments which show that babies and children already know a lot at birth and that above all they „have powerful learning mechanisms that allow them to spontaneously revise, reshape, and restructure their knowledge. This is, notoriously, the great weakness of existing computers. They are terrific at solving well-defined problems, they are not so hot at learning, and they are really awful at spontaneously changing how they learn.“(p. 23)

The authors explicate that the child’s brain is part of a more comprehensive system, a network. They go on:

„Finally, the babies have the universe’s best system of tech support: mothers. Grown-ups are themselves designed to behave in ways that will allow babies to learn. This support plays such a powerful role in the babies‘ development, in fact, that it may make sense to think of it as part of the system itself. The human baby’s computational system is really a network, held together by language and love, instead of by optic fiber.“ (p. 7)

No doubt, babies already dispose of great problem solving capacities the minute they are born. Not only do they come with great system software but already in the womb they have many well operating programs for the build-up of abilities, for the acquisition of knowledge, and for combining new information with already acquired knowledge – and they dispose of programs which unfold and develop by themselves, which have enormous potential to learn and adapt to new challenges.

How does learning happen?

It could be determinant for the intelligence of a human being how effective and adaptive theses programs are.

A human being would thereby be the more intelligent the more information from inside as well as from outside he can assimilate and above all how well he can process them into effective conceptions and abilities by means of the programs inherent in the brain. This includes: It is important for high intelligence that programs themselves be adjustable so that they diversify and perfect.