A five-year-old girl who is not yet in school but is already reading fluently starts teaching herself how to write.
She uses her writing skills for very different purposes.
The learning process becomes visible on the basis of six documents from the child’s production. The child had the ideas and implemented them alone.
Later, a test revealed giftedness.

(Please click on the pictures to enlarge them. Return to the original size with the arrow button at the top left.)

The girl is 5;11 and congratulates her parents on their wedding day. She pressed and glued on a usama violet.

In case of doubt, she writes by hearing.
This sometimes works well, for example with „BEIDE“ 〈both〉“, but sometimes it also leads to errors, as with „SEIT“ 〈since〉 instead of „SEID“ 〈are〉 and „JETZ“ instead of „JETZT“ 〈now〉.
Through the early and violent reading, however, she already knows how to spell several words correctly whose spelling cannot be heard exactly – for example „IHR“ 〈you〉 and „LIEB“ 〈sweet〉.
And she has apparently already remembered that the prefix „ver“ is written with v.

This time the girl (5;11) has set herself something else: She draws a floor plan of the apartment. The assignment of the rooms, the paths and directions are almost right. Only the parents‘ room was forgotten. 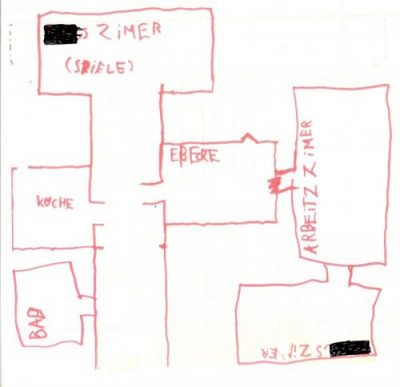 She can’t write lowercase yet. It does not (yet) seem necessary to her to learn lower case letters, because the upper case letters are (still) sufficient for her purposes.

This is an indication that it is not important to her to write perfectly, but that she wants to use writing from the beginning to express her ideas.
The motivation to practice writing arises from the pleasure in mental activity, and is intrinsic.

3. the invitation to the 6th birthday

Since both parents worked and the older sister was also on the road a lot, many notification and greeting notes were written and placed on the dining table. The little one (5;11) was very keen to get involved in this practice.
This is one of the first notes the others found: 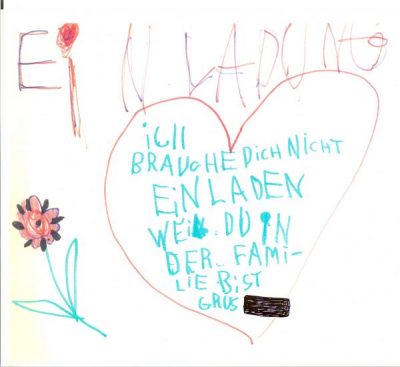 ICH BRAUCHE DICH NICHT EINLADEN WEIL DU IN DER FAMILIE BIST. GRUS … – 〈I don´t need to invite you because you are in the familiy. Greets..〉

The hyphen has already been used here, with you can separate a word so that it fits into a given frame (the heart).

It was needed, so it came to the much-reading girl’s mind. (Best learning by doing.)

The ß was already in use (see above: EßECKE 〈dining corner〉), but was not heard in „GRUS“.

With 6;1 the girl writes her own story in kindergarten. She does it secretly („The others were all outside“) and smuggles the cards with the story secretly out of the kindergarten in the lunch box. 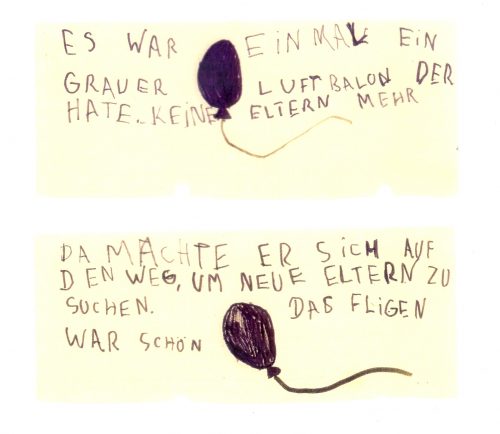 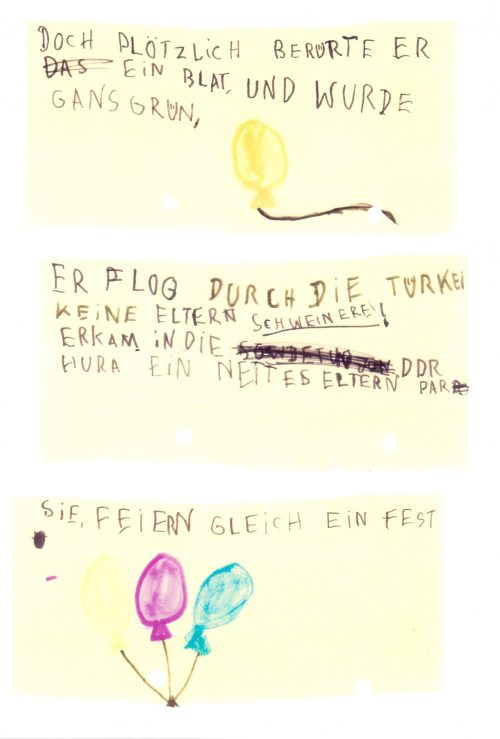 The mastery of spelling is still incomplete, the letters are not particularly correctly written, but: The child has the possibility and the courage to express himself creatively with the help of writing.
And that’s the most important thing.
New elements that have been added since the invitation: Strike out, underline, exclamation mark, (what is needed for the drama of the story).

The girl was now 6;4 and still not in school. (She was able to jump from 1st to 2nd grade three weeks after starting school.) 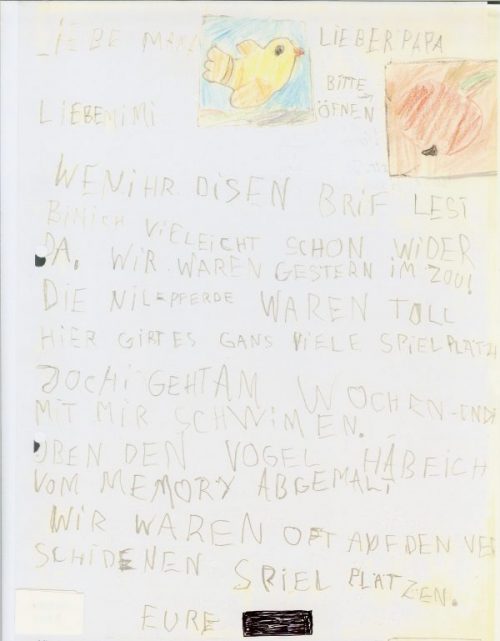 She spent a week alone with friends of the family and wrote the letter without any help.

Here every sentence already has a point at the end.

A lot of things have already been spelled correctly.
Only the strain-E after the I and the doubling of consonants still do not work:

Now the girl was 6;10 and in the 2nd grade. She picked up her mother from work after day care and one day she had to wait in the office for a while. She sat down for the first time at a typewriter (which was old, hooked in many places and had long since been discarded). 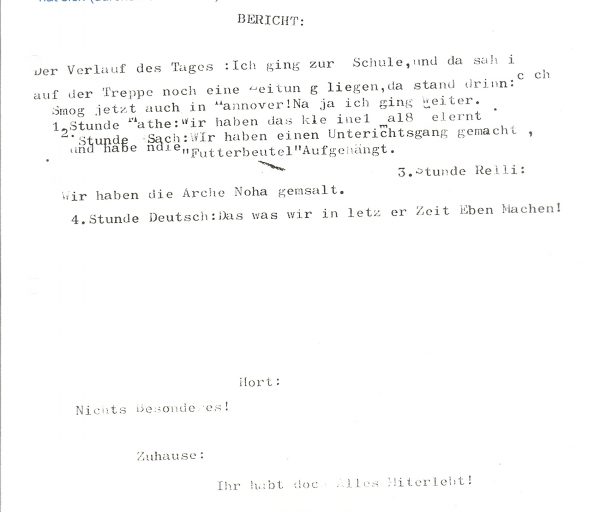 〈REPORT:
The course of the day: I went to school, and then I saw a newspaper lying on the stairs, it said: Smog now also in Hanover! Well, I went on.
First lesson of math: We have learned the small 1 times 8.
2nd hour Subject Expertise: We did a course of instruction and hung up the „food bags“.
3rd hour Religion: We painted the ark Noha (Noah).
4th German lesson: What we’ve been doing lately.
After-school care: Nothing special!
At home: You have witnessed everything!〉

She had learned lowercase and cursive writing in the meantime. But these things interested her only marginally. She was already further along with her thoughts:
The form of the report (writing down something a bit concisely and precisely) was just interesting when this example came into being.

Spelling has evolved through reading books. The punctuation was also enriched by the comma, the colon and the quotation marks.