Children who pursue self-determined learning strategies develop ideas on how to approach an object of learning interest and how to master it. Usually this is a creative process, a way of managing one’s own learning by making use of knowledge and experience already at the individual’s disposal.

By the same token the point in time, chosen to learn or explore, as well as the tempo and the scheduling of >learning units< are subject to the gifted learner’s own assessment. Gifted children are very often quite able to tell for themselves when it is time to turn to a new subject matter because the pursuit of the old one has reached a certain point of completion (temporarily).

All this pretty much describes ideal learning – given that there is a mentor standing by to accompany learning processes with empathy and insight.

From early on, however, these children feel a perceptible pressure to conform (to the expectations as to what, how and when to learn). When entering kindergarten peer pressure rises as another factor: The children want to be like the others, they don’t want to be excluded. Some children have more, some have less power to resist that peer pressure. Nevertheless we continue to observe children who insist on their own learning strategies. This is a good thing if they encounter understanding and support.

Example from a family, anonymous: 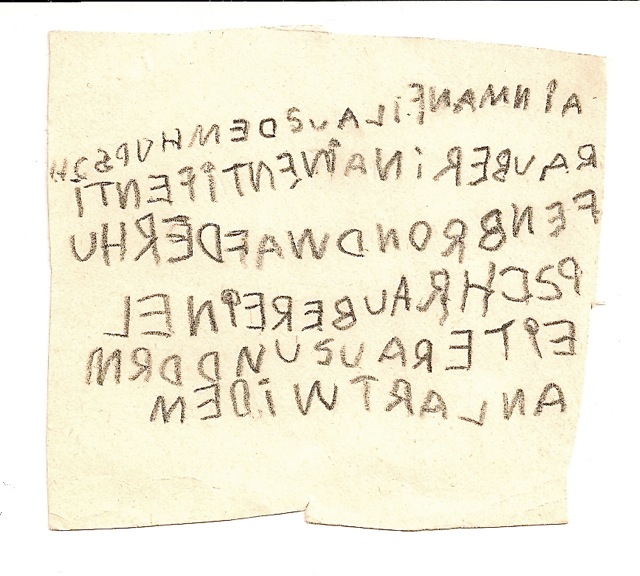 Kilian, four and a half years old. He writes in mirror script from right to left (he is left-handed) and, of course, he makes spelling mistakes, as he writes the way he hears himself speak: “A man fell from a helicopter into a deep, deep well. So the helicopter lowered a ladder and the man laughed again.“

This is how he got into reading and writing:

He didn’t speak correctly at the time, he completely omitted almost all consonants, for example: “au-e” for “faucet” or “e-o-ope” for “stethoscope”. I told him that nobody could understand him and showed him the letters he didn’t speak but were still to be heard. This didn’t make him speak correctly, but he began writing.

Example from a family, anonymous:

For quite a while he has been telling himself of his daily experiences before going to sleep. I call it his >diary project<. Sometimes I eavesdrop, it sounds really cute; his speech is still rather imperfect but he accentuates strongly. Oftentimes this will go on for up to half an hour before he falls asleep. It really does appear as if he were keeping an oral diary. Recently I overheard the sentence: “This all I experienced. Everything! Everything!”

The day before yesterday I overheard something new: He rapidly went over his very large vocabulary: a book, a blanket, an orange, a bucket excavator, an office, a ball, an overcoat,
a shovel, and so forth, for over half an hour. It sounded like a systematic exercise on the part of speech called >indefinite article< (a-an).*

I was curious to see whether he would go on with it the next night. But he already had a new >project<: the lamp, the bed, the hare, the car, the office chair, the carrot, the roll, and so forth. Apparently he was practising the definite article.**

(* In order to demonstrate the point some of the original word-examples have been replaced to fit English grammar.

* In this example the words could not be replaced to demonstrate the grammatical problem since nouns do not carry a grammatical gender in English as do nouns in German, where the masculine, feminine and neutral gender of a noun is marked by the respective definite article “der, die, das”.)

He asks himself questions like for example: “What happens if I … ?”. John finds answers to these questions by considering and checking different possibilities and then deciding in favor of one of the solutions. I often observe this when he is tackling problems of structural analysis while he is playing with building bricks.

A kindergarten teacher told me the following:

Fabian (5;8) attended a project open to all groups: >Storytelling<.

He showed great interest and motivation. Even on the days between project-days he would approach the colleague, who conducted the project, with regard to that activity.

The kids were to depict the protagonist of their story by means of a drawing. Fabian just sat there in front of his blank sheet of paper and seemed stressed and tense. When the kindergarten teacher addressed him (all the other children had long finished their sketches), Fabian drew three random lines and uttered, he wasn’t “up for drawing anything”. The next session 2 of 10 children were ready to hang their picture on the wall and tell their story to go with it.

At the next meeting Fabian finally drew his protagonist, a Leopard, after several tries, which was a strenuous procedure for him. He really wanted to tell his story and needed the picture for it.

Isn’t it good, that grown-up writers are not held to first draw their protagonist before their story will be heard? … To think of all the literature that wouldn’t have made it …

Why is a child being necessitated when it only wants to learn a different way?

Gifted children often do not want to draw when the activity is really about telling a story. They don’t have to be “guided”; they often have a scheme of their own and want to follow it.

I knew a boy who got through school entirely without the use of notebooks and folders. He disposed of a very quick learning ability and excellent memory. All his teachers pressured him: admonishments, threat of bad marks, consultations with his parents, giving poor marks.

This boy, who did participate in tests and write essays (because he saw the point here), did withstand the pressure with regard to regular homework assignments. The way he looked at it: “I don’t need to take notes, I don’t forget it. If the teacher doesn’t believe, that I know it, he can ask me.”

He learned by listening if he was interested in something. From the age of 5 years on he primarily learned by reading many books.